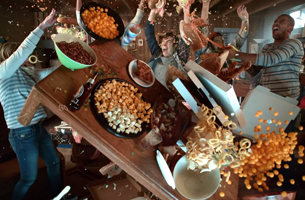 The culmination of yesterday's Super Bowl saw some rather questionable strategy not pay off. Sorry Seattle, but you fluffed it big time. However, we all know that the ball game isn't the only battle ensuing, right? The Battle of the Brands is almost as important as what goes down on the pitch. And with around 60 spots being shown this year that cost $4.5 million per 30 seconds of airtime, the pressure was on to impress more than ever. Our heartstrings were pulled at, we laughed, we were shocked, we were even saddened. But who came up trumps? LBB's Addison Capper rounds up his top 10 of the night so you don't have to trawl through them all.

I was a huge fan of last year's 'If You're Happy' and I love this equally so. With its clever, indirect drug references, expertly relaid by Breaking Bad star Aaron Paul, it's perhaps even more sinister and funny as its predecessor. It also made me feel very bad about the bowl of chicken wings I gorged on last night. Creative out of Wieden+Kennedy Portland.

This was one of my favourite pre-released spots, if only for the shot of the dog walking a man. Created by Deutsch LA.

Who better to reap revenge than the master himself? Liam Neeson stars in this amusing spot from Barton F. Graf 9000 and MJZ's Tom Kuntz.

This is, admittedly, a tried and tested formula, but one that's been taken to new heights. Danny Trejo is a fantastically funny addition, but even more so is the surprise cameo at the end. BBDO New York penned this one.

A simple idea nailed for the NFL here on its biggest night of the year. Grey New York were the agency.

'Settle It' features more of the Skittles weirdness we know and love about the brand but without it feeling forced. It's fresh, funny and very silly. Our one issue? Lemon Skittles are no one's favourite. Creative out of DDB Chicago.

This powerful PSA for the NFL's No More campaign features actual audio from a 911 emergency call. This was also created by Grey New York.

Last year Wonderful Pistachios won heaps of fans with its witty spot featuring Stephen Colbert. This year an equally niche food brand, Avocados From Mexico, bowled us over with its take on the '#FirstDraftEver'. Created by GSD&M.

"So, what even is the Internet?" That line alone makes this ad enjoyable. The whole idea, though, from Kirshenbaum Senecal + Partners, is clever and funny.