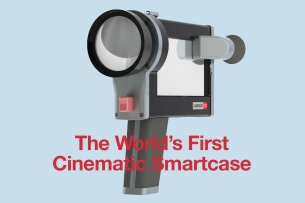 In postwar America, a prosperous economy bred with space age innovation and unleashed an amateur auteur in every household. Fathers became Fellinis with the advent of the Super 8 motion picture camera. Introduced by Kodak in 1965, this affordable shooter on a stick allowed anyone to easily chronicle life's special moments. The market eventually evolved to expensive and unwieldy videocams in the early ‘80s and on to the contraptions we use today.

But 2015 will see the reemergence of the crowd-pleasing Super 8--sort of. The Lumenati CS1, dubbed the world's first cinematic smartcase, is launching a funding campaign on Kickstarter on July 13th where “early birds” will receive a 20% discount. The new-and-improved invention will combine the technological features of a digital device (film-free shooting, instant sharing and an editing app) with the cool design, ergonomic ease and natural narrative that the lo-fi classic camera is known for.

Cinematographers simply pop their device into the Lumenati CS1 just as grandpa would load an 8mm film cartridge. The lightweight, portable unit allows anyone to frame and film a steady, stable shot with the pull of an intuitive trigger. A cold shoe allows filmmakers to attach lights, microphones and extra handles for sport shooting. The low-light, real-time viewfinder allows WYSIWYG capabilities even in bright light, a feature that is elusive to modern mobile devices. Lenses can be swapped to shoot in wide angle, fisheye and telephoto.

"Something about the shape of those old Super 8 cameras just screamed to everybody around, 'Perform!'” said Alex Bogusky, advisor/investor to Lumenati and co-founder of the CS1, of the beloved lo-fi medium. "When you pointed one at somebody, they instantly became animated, and more often than not there's a natural narrative in these home movies."