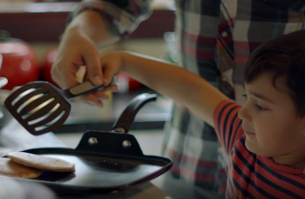 SunTrust recently conducted an annual Holiday Financial Confidence survey that showed one in four Americans (43 percent) feel pressure to spend more than they can afford during the holiday season.

SunTrust sees this as a challenge that the onUp movement can help overcome. The December holiday season is often the most challenging time to gain control over finances, resulting in overspending that can lead to financial stress and distract people from enjoying the meaningful moments.

So, this holiday season, SunTrust is spreading a different kind of holiday cheer by encouraging people to give the gift of being present in the moments that matter.

“We started a significant movement that has spread across the country since we launched onUp during the Super Bowl," said Susan Somersille Johnson, corporate executive vice president and chief marketing officer for SunTrust Banks, Inc.  "In that spirit, our holiday campaign reframes how people think about holiday giving and encourages them to enjoy what really matters this holiday."

SunTrust teamed up with StrawberryFrog New York for “Holiday Presence,” a campaign that celebrates giving the gift of presence to enjoy the moments that matter in life. The campaign raises awareness of onUp.com where SunTrust provides tips and tools (like a holiday planning guide, spending calculator, and budgeting tool) to help people make the most of the holidays.

"Think back to your favourite holiday memories. For most people, they are not the gifts they bought or received. It's the trip to the tree farm, the annual family football game, baking cookies with grandma—the special time spent with family and loved ones," said Corinne Cuthbertson, senior vice president of brand advertising and digital marketing for SunTrust. "Our campaign highlights our goal to help give the gift of being present, instead of worrying about presents."

"There's no better time to express this than the holidays when everyone's at home with their family and friends," says Scott Goodson, of StrawberryFrog. "Our bank customers want to be with a bank that empowers them to live a great life with confidence – not be sold."