Subaru Gets Interactive with Narrative Film 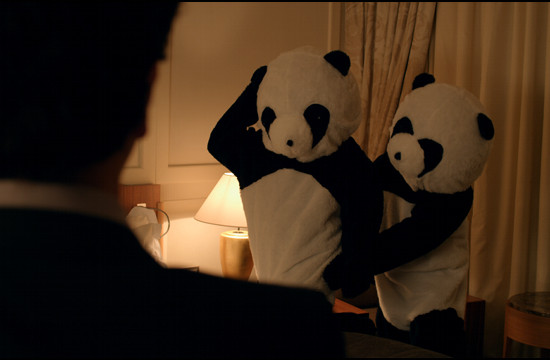 ‘The Big Night’ is a bold departure in advertising style for the car giant.  It follows a young family man’s eventful journey in his new Subaru Forester towards the hotel where the ‘big night’ of the title is to take place. The story begins with the accidental destruction of an all-important DVD required for the evening’s proceedings. The rest of the story is determined by the viewer, guiding the protagonist through a number of decisions on his way to the hotel, with potentially hilarious results.

Here's a link to the full interactive film: Subaru - The Big Night

Written by the GGi team under the supervision of ADK’s Creative Director Miura Yoshihiro and directed by Great Guns’ Jeremy Haccoun, whose acclaimed Oppo spots featured Leonardo DiCaprio last year, the film is the most complex narrative-branching interactive experience ever attempted.

“I’d never done anything like this before and, initially, it was quite daunting,” says Haccoun. “We had to shoot a 45 page script in a very short space of time. On the one hand, we had to shoot furiously quickly. On the other hand we had to be incredibly precise and careful so as not to break the interactive rules we had set ourselves. Sheridan (Thomas), Great Guns Interactive’s co-founder and writer/producer of the film, was insistent from the get go that we didn’t have any pauses in the film or any kind of overlaid buttons or prompts on screen to ruin the user experience. Instead all the interactive elements had to be shot in-camera as part of the film’s physical world. This meant that we had to get all blocking and timing absolutely perfect, often within only one or two takes, with no rehearsal time. In many ways the process was actually very liberating. We chose, for example, to light the whole room for each set so that we wouldn’t waste a second re-lighting between shots. For a director it was really fantastic because I was able to focus on working with the actors for the entirety of each shoot day.”

According to Sheridan Thomas, it was crucial that the interface went unnoticed by people following the story. “We wanted to do something more subtle than flash huge graphical prompts on screen at each interactive moment” says Thomas. “When I produced a videogame for Sega a few years ago, I’d been struck by how efficient game designers were at making the user interface so transparent and instinctive. The games industry has been working very hard to do that for more than the last two decades. What stands between you and the experience has been gradually chipped away as the technology and thinking have advanced. I wanted to bring a little of what I’d learned from that into the film world.”

“As filmmakers I just don’t think we are doing enough to advance the language of interactive film. Not everything needs to be dumbed down. We’re dealing with a very savvy, videogame-literate consumer these days, and we shouldn’t be afraid to give them a little credit in that respect when it comes to making creative decisions about the content we produce. In that respect this project was certainly a very ambitious and epic undertaking. Thankfully both Subaru and ADK were fantastically supportive of everything we wanted to do at every stage of the process”.

So epic was the undertaking that it actually required two Producers to help realise it. “We had three units running at all times”, says Jeremy McWilliams, the film’s other producer. “One of the earliest choices in the film is whether to get in the Diesel or Petrol models so we had to film every piece of the story from that point onwards twice with both cars! And this is a film with a massive number of permutations – some bold some subtle. In fact, there are 98,304 potential variations of the film. You could technically play the film for 1.68 years continuously and never see the same film twice”.

“We’re doing a lot of very subtle things behind the scenes that the viewer may not even realise is customising his or her own experience,” adds Thomas. “For example, all choices that you make have an immediate consequence. Do you choose to take the shortcut or sit behind the tractor? But your choices also stack up so that combinations of choices have their own consequences too. They also dynamically affect details like what time the clocks display throughout the film. That in turn changes the mood of the hero or the way that he is greeted when he reaches his final destination. There are some pretty wild differences to the way the film plays out. There are over 40 potential endings alone. But there are also plenty of things that just add a subtler flavour to the experience for each player. We wanted to keep the general story and tone the same for all players but give each individual player a chance to make that experience their own. Hopefully that will encourage them to play again to find what else we’ve hidden in there. For example one of the film’s crazier moments isn’t even available to you unless you’ve made the right combination of choices to hit that stretch of road at the right time.”

“We’ve even built Facebook connect into the experience”, he continues, “so that not only will a user’s profile photo appear in the film but there is also a chance that, given the wrong combination of choices, the user’s entire Facebook photo stream might be played to a room full of characters at the film’s finale.”

According to McWilliams the team were initially daunted by the scale and ambition of the project. “From a technical point of view, I think there’s a level of seamlessness with both picture and sound that is quite unparalleled for such a complex film,” he says. “What people won’t realise is that the film is actually made up of 172 individually completed film segments that are streamed depending on their choices. When Sheridan presented the story and mapped out the interactive decision tree, I must admit everybody was a little taken back by the scale of its ambition - even the interactive team. But then we all knuckled down and figured out how to make it happen.”

Haccoun, for one, is very proud of the final film and the scope of alternative options it presents. “Although each play-through will only be somewhere between 8 to 10 minutes depending on the player’s decisions, we actually ended up with 46 minutes of finished edited film. To put that in perspective, we shot half a movie.”

“I, for one, can’t wait to do it again,” responds Thomas. “If you think this one was crazily ambitious wait until you see what we’ve got planned for the next one”.