Editors' Choice: American Danny Kean goes on an adventure of a lifetime in scenic spot from agency lg2 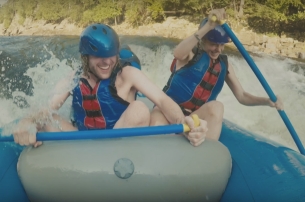 The rare and beautiful are to be found everywhere in Tourisme Québec’s new multimarket campaign from lg2, whose central piece, 'Blind love', features a blind person shooting rapids and flying a helicopter. The video follows American Danny Kean, blind from birth, as he explores Quebec for the first time. His adventure takes him to extraordinary places, such as paddling alongside whales, ziplining over the mighty Montmorency Falls and discovering the warm vibrancy of the province’s francophone cities.

The campaign, launched in the U.S., France and Canada, includes a heavy digital and social media presence, content marketing and an experiential website that allows visitors to relive “blind love” through the most memorable moments of Danny’s trip.

“This ambitious concept presents Quebec from a rare viewpoint. It’s the first time that we deployed an offensive simultaneously in several markets with this kind of reach and impact. The level of enthusiasm from our partners was also unprecedented,” mentions Sylvain Talbot, Promotional Campaign Coordinator, at Tourisme Québec.

“Today we have to win over a tourist who is already well travelled. Tourist destinations around the world try to outdo each other to be the most unique and desirable vacation destination. We had to find a truly original way to showcase Quebec in all its beauty. I believe we achieved that,” remarks Marc Fortin, Partner, Vice-President, Creative Director, at lg2.

The video and the interactive experience are available at QuebecOriginal.com, where visitors can follow Danny’s trip and discover the viewpoint of his Quebec guide and fellow adventurer as well as explore Quebec’s original side through the different senses.