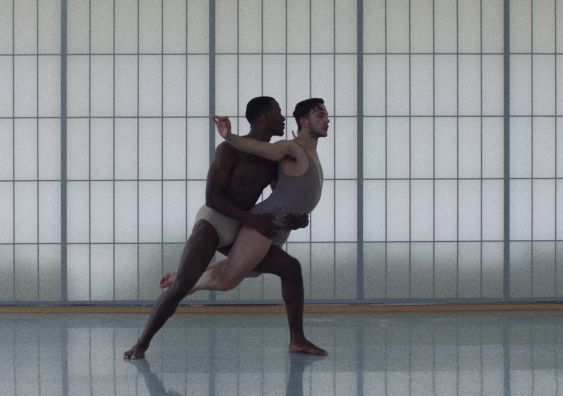 The film challenges heteronormativity in dance and wider society by telling the story of two very different artists brought together by the desire to express their true selves through movement.

"I’ve always had a complicated relationship with manliness and have felt the shadow it's cast on my self-identity all my life," states Artur. "Being brought up by a single mother in a small, post-industrial town in Poland, it’s so easy to feel like an outsider when you’re the only guy at school not interested in chasing the ball. You become an easy target and hope that one day you’ll stop feeling alien and inadequate. You pray that the faint, but tenacious voice within will stop making you doubt yourself and instead will become your most powerful ally. I wanted to make a film that will help young men feel comfortable in their own skin, regardless of how masculine or feminine they feel."

SPECTRUM is the director's first foray in documentary filmmaking. "I wanted to experiment with the formula and various storytelling tools," he says. "At the same time, solid preparation was crucial. Getting to know both Jontae and Stefanos [the dancers] was at the heart of the project – their stories are the experiences of millions of us."

Artur repurposed archive footage to emphasise how dated the archetype of masculinity is. Split screens and framing images in various shots draw a parallel to how easily society puts men into one-size-fits-all boxes.

SPECTRUM is the first production from Haze Creative Collective – a group of industry friends coming together to bring to life projects they feel passionate about. Helming the camera department was Fergus Thom. “I trusted [Fergus] fully that he would share my sensitivity on the subject matter and deliver striking images. We had a lot of fun creating the visual language for this piece and both feel happy with what we achieved,” said Artur. Supporting Fergus on the camera front was Julie Sande, who also took care of the sound. Keeping his watchful eye on the schedule was Steven Meiklem.

“SPECTRUM by no means presents an answer to what it means to be a man, but hopefully it will act as a catalyst for wider discussion,” Artur says. “The time has come to liberate ourselves from the shame and social stigma and to live as our true selves no matter how masculine or feminine we feel.”