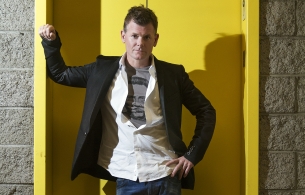 Stun Creative, the award-winning creative agency, commercial and branded content production company, has hired veteran creative and design executive Michael Vamosy as Chief Creative Officer, a new position at the company. In his role as CCO, Vamosy will lead creative work across Stun and its animation and design division Buster for all network, studio and consumer brand clients. He will report directly to Stun Founders/Principals Mark Feldstein and Brad Roth, who announced the news today.

Vamosy brings a wealth of experience from the network side, previously as SVP Creative Services at Starz where he led campaigns on the network’s original series “Outlander,” “Black Sails,” “Power” and “DaVinci’s Demons,” as well as rebrands for Starz and Encore. Earlier he was SVP of Design at FOX Broadcasting and VP of Design at FX Networks. Vamosy was an architect of FOX’s “L for Loser” campaign for “Glee.” He also helped redesign the FOX network look and spearheaded campaigns for “Fringe,” “American Idol” and “House,” among others. While at FX, he developed the network’s in-house design team “StudioFX,” which designed the packaging for original series such as “The Shield,” “Nip/Tuck” and “Rescue Me.” He spent 2011 to 2012 as Executive Creative Director at Buster, overseeing major on-air rebrands for OWN, FXM and TV One. Over the course of his career, Vamosy’s work has earned numerous PROMAX Gold and Silver Awards, TELLYs and New York Festivals honors.

“We are delighted to have Michael back as our Chief Creative Officer of both Stun and Buster,” Feldstein commented. “His work at Starz, FOX and FX make him an invaluable leader who has a first hand understanding of what clients are looking for and how we can most effectively service their brands.”

“Stun and Buster have always done amazing work,” Vamosy said. “I like the direction the agency is headed and am excited about teaming back up with a group that is doing great creative work. I look forward to collaborating with our clients and expanding their creative expectations. The best work comes from communication, understanding and a unique insight that can work across all platforms.”

Roth adds, “Michael is an innovative, ahead-of-the-curve creative partner for our entertainment and brand clients. His experience really enables him to anticipate their needs and develop a solid foundation with creative that can be applied to fully integrated campaigns from Stun and Buster. He’s extremely driven and motivated and his enthusiasm is contagious.”