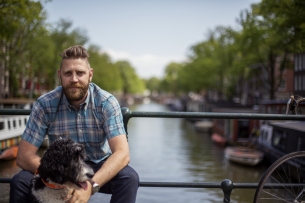 Expanding upon an already progressive leadership team, 72andSunny Amsterdam is thrilled to announce the appointment of Stuart Harkness as its new Executive Creative Director, partnering with Carlo Cavallone.

Harkness joins 72andSunny Amsterdam with over 17 years experience in advertising, and is responsible for making some of the most iconic and provocative campaigns of the last decade. Formerly a Creative Director at Wieden + Kennedy London and Portland, working with brands such as Nike, Honda, Powerade and Facebook; producing Write The Future, St. Wayne and multiple pieces within Honda’s Power of Dreams campaign.

Bolstering the existing management team with Nic Owen, Stephanie Feeney and Carlo Cavallone, Stuart will help lead the vision for 72andSunny Amsterdam - driving its commitment to help brands make a positive impact in culture. Stuart will work across the company’s entire portfolio of brands including adidas, Axe, Carlsberg, Google, Samsung and Smirnoff.

Stuart Harkness, as 72andSunny Amsterdam’s new Executive Creative Director, remarks: “72andSunny Amsterdam have done an amazing job assembling a brilliantly diverse bunch of talent and a client list that would turn David Banner green with envy. There’s a palpable energy and the Amsterdam office is poised to do groundbreaking work, in any market. Carlo is also a seriously smart cookie who cares not just about creating provocative ideas but nurturing the people who make them in the process.”

Carlo Cavallone, Executive Creative Director at 72andSunny Amsterdam commented on the hire: "We are extremely excited to have Stu joining us. He brings a lot of experience to this place, a very unique take on creativity and a dedication to his job that can rival Captain Ahab's. His long track record of amazing work combined with his very tall figure will definitely contribute to him becoming a new point of reference for this company."