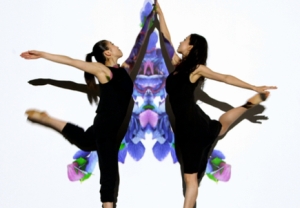 Combining elements of dance, performance art, music, technology, light and music, 'Enra' is an entertainment unit, which provides the ultimate fusion of images and live performance.  Their mesmerizing videos include this recent performance art video “Pleiades”

This 3 minute online film for SKII’s website was shot over one day in Asia this summer in a Tokyo warehouse.

Enra’s choreography and performance was inspired by the design of the SKII bottle and took 3 months to compile and process the production.

Rather uniquely, everything for the main performance of the film was created in camera, in one take. A real energy was created around the production.  The film was shot at 5K resolution in order to be able to control elements of the camera zooms within post.

With many challenges within the production, not least the heat in the Tokyo studio which meant Enra were only able to deliver seven performances at full speed, there were also limitations as Enra were in control of the graphics, music and choreography.

Stuart comments, “My aim with this project was to show a natural, unedited, organic performance piece resembling the beauty and purity of SKII. In a world full of CGI and animation (created in post), I wanted to create a film that was as it was shot in the studio and I believe we managed to achieve this. If people watch this film and say it was simple, clean and effortless then I think we have achieved our goal”.