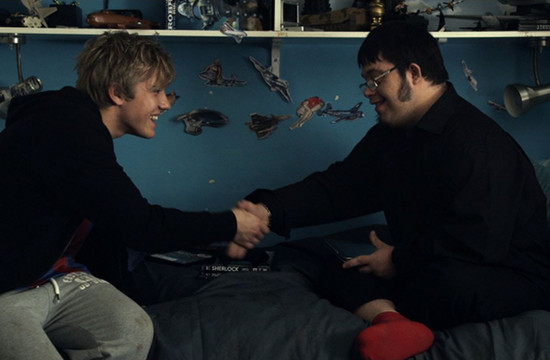 ‘Ups and Downs’ spans 48 hours in the lives of brothers Josh and Harry. Much occurs within those 48 short hours: Harry turns 18 and grows up, there’s a party, there are tears and traumas but most crucially, the brothers find that their bond is far more integral than either of them realised. Stuart Fryer (Monty Films) is a visceral storyteller. A director who unflinchingly captures the reality of a frayed sibling relationship and wins hearts with his first short film - screening October 3rd at London’s Hospital Club.

“I have always wanted to be a filmmaker that tells stories.  As a working director in the corporate and ad agency world, the latest work I’ve done is for a bank, a loan company, an oil corporation, a house cleaning detergent and a mortgage company. I want to make films that have emotion. That tell a story about the world we live in. I just want to make something worthy...” Stuart Fryer - Director

‘Ups and Down’s’ stars Otto Baxter – already the subject of two BBC documentaries - Otto: Love, Lust & Las Vegas and Natalie Cassidy’s Real Britain. He has Down’s Syndrome and Tourette’s - but has never let that get in his way and has been working in front of the camera since he was 2 year’s old.

“I love being part of a project, going up to Manchester to film, staying in hotels with chandeliers, just like Titanic! Feels like I'm a superstar!” Otto Baxter - ‘Josh’

The film co-stars teen heartthrob Bobby Lockwood - who plays Rydian Morris in CBeebies drama ‘Wolfblood’ and Edward Ashley – a rising star who has just gained the fourth lead in new Hollywood feature directed by Ron Howard. ‘Heart of The Sea’ is an 80 million dollar feature being shot at Pinewood Studios this winter.  Stuart possesses an ability to tap directly into audience’s emotions with his honest reflections of real life. He has a cinematic shooting style inspired by his absolute passion for cinema and storytelling:

“There are two types of people in this world.  Those who can tell a good story - whether it be in Hollywood or by the water cooler at work – and those who can’t.  Those great storytellers are my inspiration.” - Stuart Fryer – Director

The launch screening is October 3rd at London’s Hospital Club, Covent Garden. Your invitation is attached. RSVP to lowri@montyfilms.co.uk