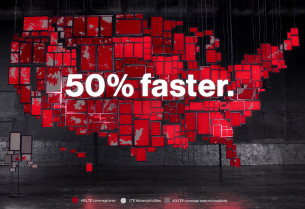 The new tech will bring 50 percent faster peak wireless data speeds to more than 288 million people in 461 cities from coast to coast. Verizon LTE Advanced hits all the major cities, and covers loads of less-served places including highways, interstates, country roads and rural America. So customers don’t need to stay in one place to get great high speed connections, they can use their mobile devices to actually be mobile and head to the places they work, vacation and want to go.

“Our customers just received a major network enhancement for no additional cost,” said Tami Erwin, head of operations for Verizon’s wireless unit. “Verizon LTE Advanced works like a turbocharger on an engine. Speed boosts kick in when you need it most, with big data use.  That’s when you get the big peak boost of Verizon LTE Advanced.”