Strava Insights Reveals the Most Active Cities Around the World

Trends and Insight 749 Add to collection 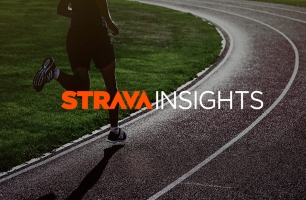 Strava, the leading social network for athletes, has launched a new platform called Strava Insights, a destination that will allow users to analyse and compare the cycling and running habits from 12 cities around the world.

Drawing data from over 136 billion data points, Strava Insights transforms and translates that data into stories, tangible insights and visuals. Users can scroll through four different modular sections within the platform to explore the Strava community behaviour in each of the 12 cities.

Worldwide; an interactive globe allows users to roam and compare each city’s total logged Strava activity including average pace and distanced covered – even how many marathons or century rides have been completed. 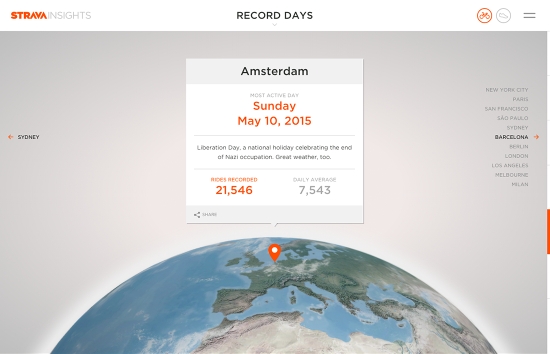 Time & Place; An interactive world-clock reveals which cities are more active first thing in the morning, fitting it into their lunch breaks, or late in the evening.

Record Days; whether it is a marathon day, a sportive, or the hottest day of the year, Strava Insights identifies peaks in a city’s logged activity. 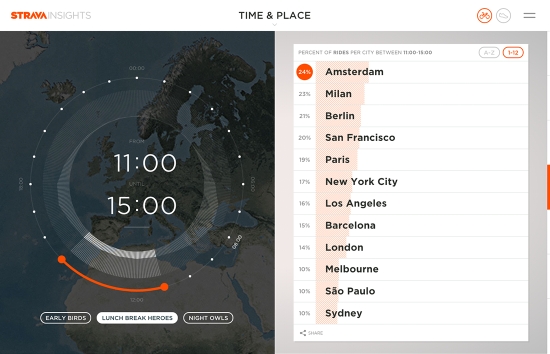 Strava have a wealth of data generated by their athletic community since 2009. Today, this dataset grows by over five million activities per week and comprises of nearly a trillion GPS data points. As it stands, over 30 million activities have been uploaded in the last year across these 12 cities. This data collection gives Strava unparalleled level of insight into the habits of runners and cyclists around the world.

“Strava Insights is the culmination of analysing billions of GPS data points and millions of athlete activities, giving never-seen-before insight into cycling and running behaviours in 12 key global cities,” said Davis Kitchel, co-Founder of Strava and Strava Geo Lead. "We want to give our millions of athletes a fascinating view of how their own activities compare with their fellow community members both near and far.”

The fully responsive platform has been developed as a collaboration between Strava and creative agency Stinkdigital, and been designed to scale as the Strava community continues to grow, with new insights published each week.