Damon Stapleton, chief creative officer of DDB New Zealand discusses how Cannes gives you inspiration but you will still have to figure out where to go 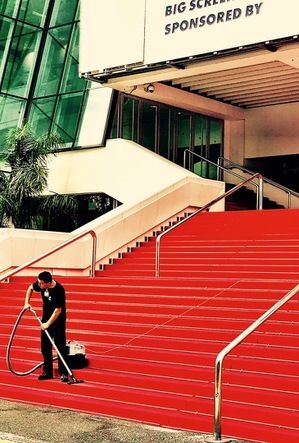 "Life is like Sanskrit read to a pony." - Lou Reed
I had been looking for a sign for a couple of days. And there it was.

I was walking down a little back street in Cannes. I reached one of those fashion outlets that always make me think they are a front for something else. In my head, it was the Marseilles mafia smuggling huge wheels of cheese, fake wine and millions of questionable Moroccan cigarettes. You know those stores. They never have any customers but somehow always remain open. I stared at the faceless and lonely mannequins and on the window was the quote that perfectly summed up Cannes this year.

For years, Cannes had been a place where for a week, it felt like a million oracles had all been parachuted onto the Carlton Terrace. They would take a sip of their mystical Rose', adjust their newly bought scarves, look you in the eye and say, I can explain everything.

That is no longer the case. Cannes is now like that weird swimming pool in Stranger Things. The Upside Down.

Whatever you hear in Cannes, you will also hear and see the exact opposite.

Let me give you what I heard and wrote down from discussions around me in a single Cannes hour to demonstrate what I mean. All this, in one hour. User experience is everything in the future, emotional storytelling is what is really important, why being human is the way forward, the efficiency of programmatic will set you free, consultancies are so much more/less, Agencies, what is the new model, Blockchain is off the chain, dog (Yes, somebody actually said that), television isn't dying, it's having babies. I really could go on for a couple of pages.

Let's take stuff that you have read over and over. So, perhaps you think it is true. Take the often said line that advertising is dying. My creative partner Shane Bradnick made the wry observation while we were lining up to register on day one that if advertising is dying there sure are a lot of people at the funeral. Cannes was packed but everybody kept saying or asking if advertising was dying. The weirdness was industrial strength this year.

Or, you will be walking behind two men wearing identical pairs of chinos talking about the genius of A.I between the Martinez and the Carlton. I counted them saying the word optimisation 12 times within the length of a single Dior store. You will then walk into the Palais and hear somebody else in a Panama hat saying A.I is bullshit. It is just this years buzzword like big data was a couple of years ago.

The phrase I remember overhearing at breakfast was somebody saying replace the letters A.I with the words computer programme and it's not so sexy is it.

And, I am sure both conversations are 100 percent valid, or not. That is how it was every day. Literally, think of any topic or perspective and the opposite was right next to it poking it in the ribs.

This created a type of madness in some people. They were wrestling with an unending anaconda of ambiguity. They developed a strange form of Tourette's and kept asking what the bloody trends were this year. Like this, would keep them safe and give them a map. There is no map.

Those questions were questions Cannes used to be able to answer. In the past, Cannes could create an order for the coming year and those old buildings could take new ideas and create a pattern we could all see. The reality is there are no more patterns or perhaps there are millions of them. Either way, things are moving too quickly for a compass. Cannes can still give you an engine fuelled with inspiration but you will have to figure out where to go. And that might all change tomorrow.

My friend Ari Weiss and CCO for DDB North America explains the issue very well in his article for Campaign - view here.

What has changed is time. We don't have any. And strangely, I am not even sure how valuable it is anymore. I mean what the hell is a trend in advertising? Two of the biggest winners in the last couple of years were sculptures. Fearless Girl and Graham. Is that a trend? Should we all be taking sculpture classes? I am being facetious but you get the idea. The simple answer Cannes gave me this year is don't worry about trends and where things are going just deal with what is right in front of you.

Just deal with today because today is far longer than it used to be.

In amongst all the weirdness and confusion, I found that thought quite liberating.

Do what is in front of you.