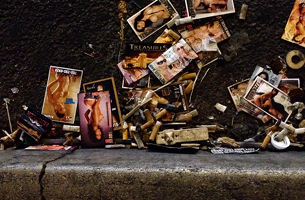 When I was asked to write a photo-essay on my time in Vegas for the Creative Liaisons programme, my first thought was to do something on typography. Because Vegas is chock full of it. Everywhere you go you’re bombarded by eye-achingly bright, foot-high letters in all kinds of fonts and colour palettes. But when I started swiping back through all my thumbnails, I realized they weren’t actually the most interesting shots I’d taken.

The most interesting shots all seemed to have one thing in common. They all involved weird juxtapositions. Different elements coming together, in a surprising and sometimes quite unsettling way.

I don’t think this happens that often, normally. This is something quite specific to Vegas, as a place where every square inch is clamouring for your attention. Slot machines, club fliers, bar names, screens inside cabs, screens on top of cabs, fake monuments, glittering casinos, naked people, homeless people, even carpets – all desperate to be looked at.

It’s also totally bonkers. The sort of place you can turn a corner and be confronted with a moon-walking child, an obese Playboy bunny, and a man sucking wine from a blood bag - all in the same few square feet of pavement.

Which makes for some pretty interesting visual combinations.

It struck me that this is actually very relevant to advertising, as the best executions often come from interesting visual tensions and subversions. Particularly where posters are concerned. Usually they’ll set a scene and throw something in you weren’t quite expecting, and you have a striking visual. Which makes you re-evaluate what you were looking at in the first place.

I’m not saying any of these photos would make great ads. But I do think they’re using similar tactics. As I was going through them on my phone, they all made me react in some way. Made me smile, or made me sad, or made me want to find some sort of meaning behind them. And I think it’s this strange juxtaposition of visual elements that has this effect.

Or maybe my eyes are still recovering from Vegas.

Check out Sophie's pictures below.