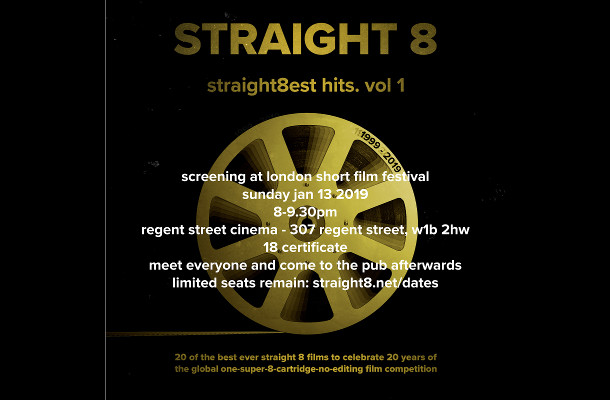 straight 8 is holding its first ever major retrospective screening, to celebrate its 20th year, at London Short Film Festival this Sunday night and some seats remain.

This is an extraordinary collection of impressive shorts - all made on super 8 with not a single splice, for the straight 8 competition since its inception in 1999.

The 20 straight8est hits vol.1 line up will be revealed on the night and some of the early films have been re-scanned from the original celluloid by Cinelab London - so will be seen as never before.

“If you like your visual storytelling as raw as it gets, you'll love this. We've never shown such a strong selection. The big screen at Regent Street Cinema may actually catch fire. Come and celebrate the start of the 20th anniversary year of straight 8 with us at London Short Film Festival and meet many of the makers”

Founder, Ed Sayers says: “It was seriously hard to choose just 20 straight8est hits hence we’ve called it vol.1. So many cinematic mini-masterpieces have been a big part of the straight 8 journey since 1999. This really is one of the most solid collections of shorts you will ever see. Congrats to all who made these wonders - straight 8 is indebted to your creative bravery.”

And it’s the perfect way to get inspired... because straight 8 2019 is open now with places going fast. 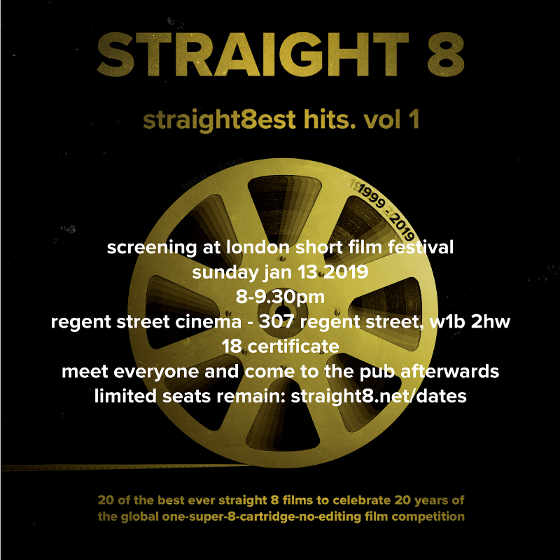 straight 8 began in 1999 when director, Ed Sayers, asked friends to have a go at making a short film on one cartridge of super 8 each - with no waste, at a 1:1 shooting ratio. The films were screened in London’s West End to a packed audience, projecting off Super 8 with the audio playing from cassettes.

straight 8 now receives 100-200 entries to its annual competition from all over the world and has enjoyed 13 years of premieres at The Cannes Film Festival, plus stints on Channel 4 broadcast TV and has appeared at many festivals. Past entrants include Edgar Wright ( Baby Driver, Shaun of The Dead ), Alice Lowe ( Sightseers, Prevenge ) and many more.