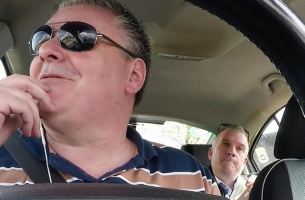 This week saw probably the most tongue-in-cheek ‘weigh-in’ on the Irish referendum debate on Gay Marriage. Guns or Knives, a new Dublin Creative Agency, approached their client Hailo, with a simple idea to promote their new Pre-Book facility, while displaying oodles of their brand personality to their core audience.

In support of the referendum, Hailo had been offering free taxi rides to the polling stations. However getting the message through was proving difficult with the onslaught of noise around the vote itself.

So the creative team at Guns or Knives came up with “The Heterophobic Taxi Driver”, a hidden camera prank played on unsuspecting passengers.

“Dublin’s cabbies have lots of opinions and are well known for sharing them” comments, Kevin Keenan, Creative Director at Guns or Knives. “So we flipped a traditional prejudice, to give a satirical take on discrimination. Then we found a proper Dublin taxi driver who we reckoned could pull it off.”

It was essential for the project to air just before the two day media moratorium, to fill the void in the discussion about the referendum.

“The timing of the piece was crucial. We didn’t have a lot of time and from idea to airing, the project was completed in just under a week."

The debate at this point had become heated, less upbeat and even a little tired, this was a refreshing piece to lighten the mood ahead of voting day.  And of course, to get bums on taxi seats on Friday 22nd !

The campaign was launched at 5pm on 19th May 2015 and will run online until the referendum.