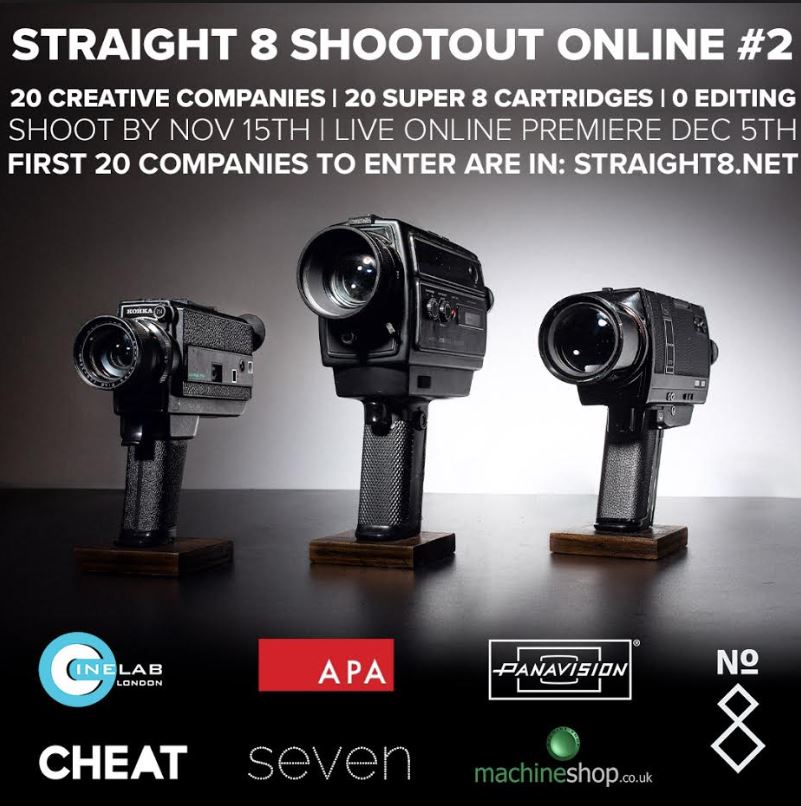 Hot on the heels of shootout at cannes 2019, straight 8 - the global one-super-8-cartridge-no-editing film challenge - has launched its next ‘shootout’: a chance for creative companies worldwide to compete for charity with a new super 8 short film, made entirely in-camera, and seen for the first time, even by them, at the online premiere in December.

Any kind of creative company is invited to rise to the straight 8 shootout challenge: to make a 2.5 minute short film created entirely in-camera on just one cartridge of super 8mm film. Every shot is taken in story order, with no opportunity for re-takes or editing. Any visual effects, colouring and titling must be done the old-fashioned way: as part of the shoot, with the camera. Super 8 doesn’t record sound, so soundtracks are made ‘blind’ and must be original. Entrants send their exposed but undeveloped film cartridges to straight 8 partners Cinelab London who will process and scan the films. straight 8 will then line up each soundtrack with the first frame of the film. It’s that ‘simple’.

The creative brief: what do you want to do with 2.5 minutes of screen time to impress your colleagues, competitors and friends who’ll be watching your film when you do? Because the most thrilling part is that the first time anyone sees even their own work - no matter how, or even if, it came out - is at the premiere which in this case is live online, with the world watching! During the live stream, entered companies will cast their votes, not voting for their own film and the winners will be announced. As well as earning an iconic camera trophy made by shootout partners, Machine Shop, they get to donate prize money to the charities of their choice.

20 is the maximum number of companies that may enter. It’s strictly first come first served and all entry details are here.

NOW: check the rules, plan your film and get permission from your company to be ready to enter...

SEP 24TH: entry opens 8am London time. Only the first 20 companies to buy their entry place are in.

Ed Sayers, straight 8 founder: “We’re very happy to be continuing to grow shootout. It only takes 20 brave companies to put their name on the line and get to do what they want: no brief, no budget, technical restraints galore but otherwise pure creative freedom. That freedom is debilitating for some but for everyone else shootout is here. And our existing partners and new ones - we welcome Cheat, No.8 and Panavision - are all helping us make sure it keeps growing and that our unusual challenge is thrown down to ever more varied companies.”

Steve Davies, chief executive, APA London: “straight 8 is the most fun filmmaking competition for companies. Watching the films with the filmmakers who haven’t seen them either is compelling- they might be great, and often are, but if they aren’t, it's only a couple of minutes and you're on to the next one! The online version is even more exciting as there's no knowing how many people are tuning in.”

Adrian Bull, managing director, Cinelab London: “We process hundreds of films each year, from 70mm down to super 8, with recent films including Mission Impossible and Wonder Woman 1984, and yet still one of the most exciting projects we are involved with is straight 8. The sheer creativity that entrants manage to pack into each reel of super 8 film is amazing, and that’s why we support it.”

APA - The Advertising Producers Association was formed by and represents the interests of production companies, post production, music, sound design, VFX and editing companies making commercials in the UK.

Cinelab London - Offers a full range of laboratory services from colour and B&W 65mm, 35mm, 16mm and 8mm neg processing to 35mm feature film distribution printing. They support film, commercial and television clients, as well as content owners who wish to preserve and restore their film and media archives.

Machine Shop - Machine Shop Special Effects provides a range of live atmospheric and pyrotechnic floor-effects with their reliable and experienced team of technicians. They also offer superior modelmaking and animatronics services from their team of in-house specialists.