straight 8 Shootout is Heading Back to Cannes for 2022 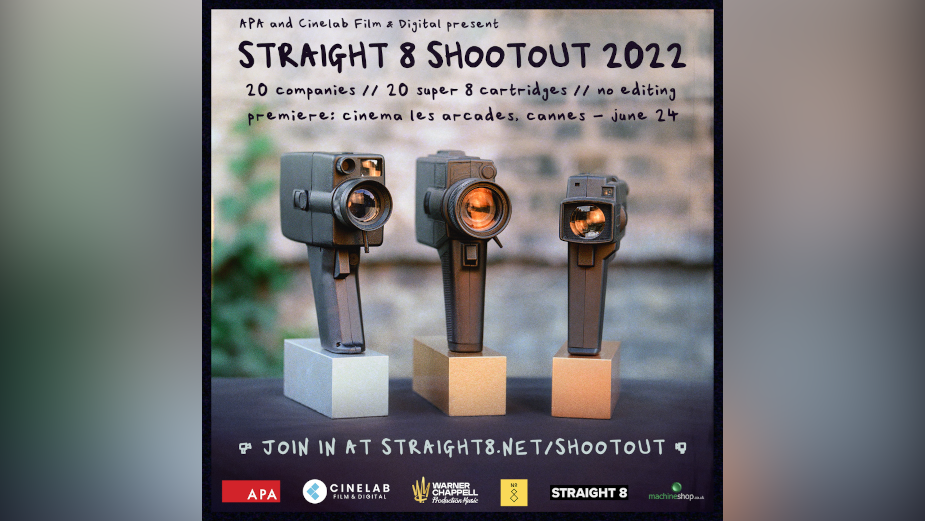 straight 8’s global analogue filmmaking showdown for companies: ‘straight 8 shootout’ is heading back to Cannes for 2022. Entering companies are invited to compete for charity by making a short film, editing entirely in-camera on just one roll of super 8 film. The first time anyone sees even their own work - no matter how it comes out - will be at the packed cinema premiere.

The creative brief? Open. After two years of themes straight 8 are reverting to its age old challenge: which is simply, what do you want to do with 2.5 minutes of the silver screen at a beautiful cinema full of colleagues, competitors and friends?

Film must be made by end of May, and only 20 companies can compete so sign up asap to secure a place in this competition, only here.

And, for those in London, join straight 8 for the launch event on March 24th at the Prince Charles Cinema, at 6.15pm. Get inspired at the first ever cinema outing for the six winning films from the two lockdown shootouts, followed by a panel with last edition’s Gold winners, Caviar - who have already committed to defend their title for 2022. Each ticket includes a drink token for the post-event drinks at a nearby venue. Ticket link.

Any kind of creative company is invited to take the straight 8 shootout challenge: to make a 2.5 minute short film created entirely in-camera on just one cartridge of super 8mm film. Every shot is taken in story order, with no opportunity for re-takes or editing. Any visual effects, colouring and titling must be done the old-fashioned way: as part of the shoot, with the camera. Super 8 doesn’t record sound, so soundtracks are made ‘blind’ and must be original. Entrants send their exposed but un-developed film cartridges to straight 8 partners Cinelab Film & Digital who will process and scan the films. straight 8 will then line up each soundtrack with the first frame of the film. It’s that ‘simple’.

Since launching shootout in 2016 with APA London, its success has been proven at Cannes, Ciclope and Adfest and two lockdown editions, with a live online premiere broadcast to a global audience including entrants in Australia, Spain, South Africa, Tokyo. Many top creative companies from around the world have now risen to straight 8’s shootout challenge. See some of the companies who’ve entered, their winning films and some of the charities who’ve benefited to date, here.

Steve Davies, chief executive, APA London, says: “straight 8 is a brilliant film competition. We are delighted to be back in Cannes with it this year and supporting its launch event in London. It is a fantastic opportunity and platform for emerging directors to showcase their skills and creativity in front of the wider industry.”

Sorcha Shepherd, managing executive producer, Caviar London (Gold winner), says: “Caviar won gold last time with Quba Tuakli directing, and we're aiming for the crown again! It’s our third year doing straight 8 shootout and we support it because it’s a truly unique and fun event to be involved with.  The laughs we had creating Quba’s award winner from last year is honestly one of the reasons why we are back for more. So I’m throwing down the gauntlet here, come at us with your A-game because we are looking to retain that gold!”

Cameron March, director, The Producers (Silver Winner): “Not knowing if the film was exposed, in focus or if it had even made it safely all the way to the UK was all part of the fun. What a whirlwind! It was an extremely liberating process putting our film in the hands of the 8mm gods to be showcased to some of the world’s best companies. An incredible privilege and honour that the festival offers. Every director should embark on their own straight 8 adventure, I promise it’s worth it.”

Roberto Borzoni, head of UK production music, Warner Chappell Production Music, comments: “We’re really excited to be partnering with this competition. We really like the punk aesthetic and creative spirit behind the straight 8 shootout and just the full on fun factor of it. Some real positivity and good vibes that match our ethos.”

Adrian Bull, managing director, Cinelab Film & Digital, comments: “We process hundreds of films each year, from 65mm down to super 8, with recent films including No Time to Die and LAST NIGHT IN SOHO, and yet still one of the most exciting projects we are involved with is straight 8.

Barny Wright, managing director, No.8, comments: “We are really looking forward to this Cannes shootout! We signed up as a partner at the last in person event pre lockdown. Hopefully, we can work on sound design for a few on the entrants again too! Our record on winners is pretty good!”

Ed Sayers, straight 8 founder, comments: “We’re so happy to be bringing the most truly daring and raw filmmaking back to where it belongs again: on a massive screen, in Cannes. If the fear is putting you off entering your company, you should fight it. Or give in to it and just come and watch how the brave ones get on.”