The one super 8 cartridge no editing film challenge takes its ad industry charity shootout format to Japan, the USA and South Africa 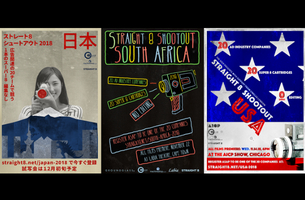 Companies from the ad industry in Japan, USA and South Africa are invited to rise to the straight 8 shootout challenge: to make a 2.5 minute short film created purely in-camera on one cartridge of super 8mm film. Every shot is taken in story order, with no opportunity for re-takes or editing.

Any visual effects, colouring and titling must be done the old-fashioned way: as part of the shoot. Super 8 doesn’t record sound, so soundtracks are made ‘blind’ and must be original. Entrants send their exposed but un-developed film cartridges to straight 8 partners Cinelab London who process and scan the films. straight 8 then line up each soundtrack with the first frame of each film

Perhaps the most thrilling part is that the first time anyone sees even their own work is at the premiere which is packed with an audience of their peers.

A live vote at the cinema follows the screening and winning companies donate prize money to the charities of their choice. Because every film is shown at the premiere - no matter how, or whether, it turned out - 20 is the maximum number of companies that may enter. To have a chance to enter, interested companies must register on the straight 8 site ASAP.

The creative brief? Simply: what you want to do with 2.5 minutes of the silver screen at a beautiful cinema full of colleagues, competitors and friends?

Ed Sayers, straight 8 founder comments: “There’s something thrilling about shooting a film and then not being allowed to do a thing with it until its cinema screening. No polishing it to within an inch of its life. No being sick of the sight of it by the time it’s done. This is the ultimate digital detox: from camera to screen without software or sellotape. OK - you can polish the hell out of your soundtrack but you’ll still wonder if it will synch up - and you’ll only find out at the premiere. We’re thrilled to be bringing shootout to more people in more places and we can’t wait to see what they’ll do".

Asif Kapadia, Academy, BAFTA & Grammy Award winning writer-director (Amy, Senna, The Warrior), and jury member for straight 8’s annual open competition since 2016 states, "I started shooting on Super 8 and 16mm. Film is precious. With no video assist you trust your instincts. This is what I love about straight 8, the magic of cinema in its purest form".

Adrian Bull, Managing Director, Cinelab London , added, “We process hundreds of films each year, from 70mm down to super 8, and from Mission Impossible to Phantom Thread, and yet still one of the most exciting projects we are involved with is straight 8. The sheer creativity that entrants manage to pack into each reel of super 8 film is amazing, and that’s why we support it".

Jimmy Lam, President, Adfest : “It’s a fucking stupid way to make a film, but I love it".

Since launching shootout in 2016 with APALondon , its success has been proven at Cannes, Ciclope and Adfest. Top ad companies from around the world have risen to straight 8’s challenge. See some of the companies who’ve entered and some of the charities who’ve benefited to date, here.

The three premieres will be the first ever straight 8 shootout premieres in each country and will take place in November and December.