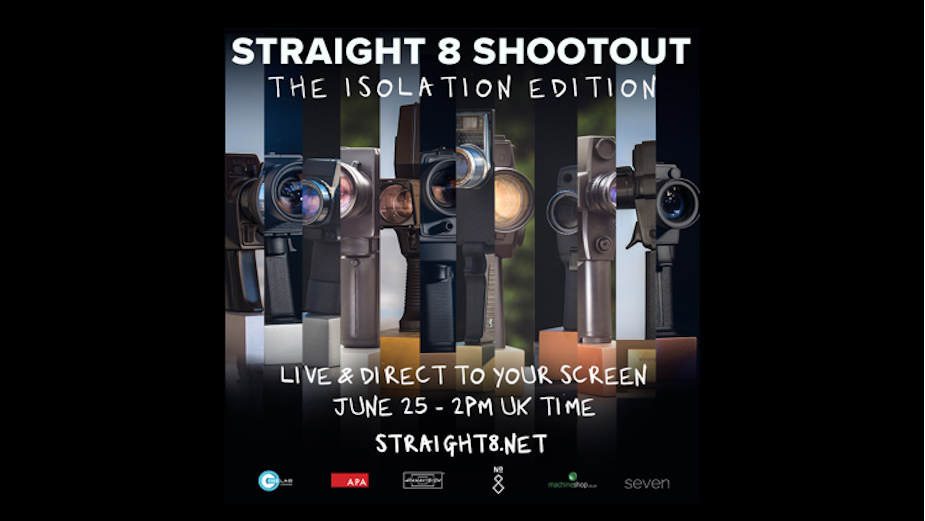 Thirteen creative companies from around the world will battle it out with their in-camera-edited super 8 films made under strict lockdown conditions, for straight 8’s charity company competition 'Shootout'.
In competition are adamandeveDDB, Caviar, Iris Worldwide, JAM VFX, Partizan, Rockhound (all from London), Blur Films + 24/7 (Madrid office), Yolafilmo Productions (Barcelona), Voces Imaginarias (Mexico City), Mr+Positive and Nion (both from Tokyo), Gloria Content and 432 Films (Los Angeles).
These brave creative companies snapped up their places to compete for charity in straight 8 shootout. They signed up to make a film in one of the hardest ways on earth: edited in-camera, on one roll of super 8, with no post-production, and therefore no opportunity to tweak it or even see it before its global premiere. That premiere was due to be on the same date in Cannes during the Lions International Festival of Creativity - now cancelled.
Grant Hunter, global executive creative director, Iris Worldwide, says: “The straight 8 industry shootout has always been about flexing your creativity within constraints. The added restriction of lockdown just adds to the challenge. We’re pumped to be involved again. Bring it on.”
So, straight 8, their partners: APA, Cinelab London, No.8, Panavision, Machine Shop and the cohort of entered companies agreed to defy the odds and premiere on the same date, 25th June, but live online without breaking isolation guidelines for their shoots. Find out how they fared using the potency of creative shape-shifting without crew, actors, locations, and with limited craft services and toilet roll. Shootout partner Cinelab London has run a special bath just for this batch of films.
straight 8 Founder, Ed Sayers says: “Even we won’t have seen the results and all films will play even if they’re black. It takes the most ridiculously brave creative companies to put their neck and brand on the line like this so we thank them all! We can’t wait to see what’s been made, and who comes out on top. We want to have as big an online audience as possible, so please tune in and tell your friends around the world to join in too!”
Sorcha Shepherd, managing executive producer, Caviar London, comments: “OK, so we are stuck in isolation, which can be looked at in two different ways. One, we could choose to give up. Sit and eat ice cream and watch Tiger King on repeat. I’m not judging, I’ve been there! Or two, we could say, fuck this! We are creative people, we are problem solvers, we have stories to tell and we will not be defeated by these four walls. We are going to embrace the bizarre freedom there is in having these parameters set for us & we will deliver films that will inspire, evoke emotions and create a sense of togetherness. Because even a global epidemic cannot stop creativity.”
During the stream, right after the films have played all entered companies will cast their votes, not voting for their own film. The winners will get an iconic camera trophy made by shootout partners, Machine Shop, and will get to donate prize money to the charities of their choice. Any kind of creative company is invited to take the straight 8 shootout challenge: to make a two and a half minute short film created entirely in-camera on just
one cartridge of super 8mm film. Every shot is taken in story order, with no opportunity for re-takes or editing. Any visual effects, colouring and titling must be done the old-fashioned way: as part of the shoot, with the camera. Super 8 doesn’t record sound, so soundtracks are made ‘blind’ and must be original.
Entrants send their exposed but un-developed film cartridges to straight 8 partners Cinelab London who will process and scan the films. straight 8 will then line up each soundtrack with the first frame of the film. It’s that ‘simple’. The day before and after the shootout premiere, straight 8 will live stream the winners of their annual open competition straight 8 2020 for individuals, which has screened annually at The Cannes Film Festival since 2003.
Key Dates
24th June - 8pm UK time - Best 8 of straight 8 2020
26th June - 8pm UK time - Best 25 of straight 8 2020
Jenny Beckett, managing director at Partizan, comments: “Partizan is absolutely thrilled to be involved with straight 8 this year. At its core, straight
8 is a creative challenge, and 2020 is proving the biggest one yet for our industry. Keeping the competition going is a comforting reminder that life can, and will go on when this is all over, and of the resilience of our industry. The added challenge of completing straight 8 whilst in isolation will add a totally new dimension to the films and inevitably really test the creativity of the filmmakers."
Adrian Bull, managing director, Cinelab London, adds: “We process hundreds of films each year, from 70mm down to super 8, with recent films including 'No Time to Die' and 'Wonder Woman 1984', and yet still one of the most exciting projects we are involved with is straight 8. I’m very excited to see the ‘isolation edition’ entries, lots of opportunities for some post-apocalyptic films without the expense of stopping the people, traffic and planes! - But without going anywhere!”
view more - Awards and Events