Unable to premiere at Cannes Film Festival, the eight winning films will be available via a free global stream 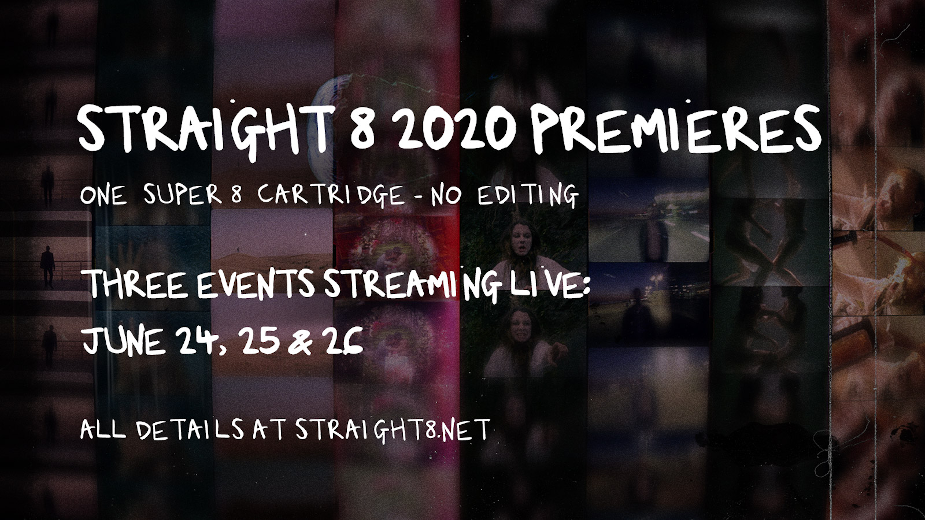 Since 1999, straight 8, the renowned super 8 competition, has challenged filmmakers to create three-minute films on one roll of super 8mm film with only in-camera editing. Today, they announce their eight 2020 winners, as selected by a panel including Academy-Award winning Director Asif Kapadia (Senna, Amy, Diego Maradona) and Academy-Award nominated director of photography Robbie Ryan (American Honey, The Favourite, Marriage Story).

The 8 films would have been unveiled at straight 8’s 15th annual Cannes Film Festival Premiere in May. Now, for the first time in over a decade, the premiere of the eight winning films will be available for the general public to watch live via a free global stream at www.straight8.net on June 24th, at 8pm BST. As always, even the films’ creators won’t have seen their work beforehand.

Over 200 people entered this year’s competition from 26 countries. The submission deadline was before most countries went into lockdown, meaning that these unseen films are something of a creative time capsule: made in relative freedom, before Covid-19 took hold.

The 45 minute show will showcase the 8 winning films and is packed with bonus content, including commentary from the judges and special guests, plus behind-the-scenes footage and interviews from the filmmakers. Each film’s maximum length is three minutes 20 seconds, dictated by the 50 feet / 15 metres length of celluloid film in a Super 8 cartridge. Each year there are eight winners and, with no creative theme set, the premiere is always a highly varied and entertaining show.

straight 8 founder, Ed Sayers comments: “Making a short film in the straight 8 way is an incredible challenge for filmmakers. Being allowed one roll of Super 8mm film, with only in-camera editing, and no post-production, means that directors need to be smart: to plan amazingly well and then adapt on the spot when things inevitably change. This year’s selection is superb and because of everything going on in the world, we’ve also adapted and we now have the joy of sharing the films to the whole world at once.”

Cinelab London managing director, Adrian Bull comments: “Last year was the busiest year ever for Cinelab, processing enough film to reach from London to Rome! Whilst Wonder Woman 1984 and the latest Bond - No Time To Die - are in the can awaiting release, nothing will stop straight 8 2020 - another mile and a half of new films - from being shown. It’s always exciting to see the top selected films at the Cannes Film Festival, but with lockdown this year the premiere will be more inclusive, with a bigger audience than ever getting a chance to see the premiere of these films online, at home, for free.”

Asif Kapadia, director of Diego Maradona, Amy and Senna, comments: “I started shooting on super 8 and 16mm. What I love about straight 8 is it reminds you that film is precious; every frame, every second is valuable. Shooting without a screen, no sound, no playback, no way to delete mistakes, encourages you to think before you shoot and to trust your gut instincts. This is how the masters like Hitchcock and Scorsese started. That’s what I love about straight 8, it’s the magic of Cinema, in its purest form.”

Robbie Ryan, director of photography of American Honey, The Favourite, Marriage Story, commented after the 2019 Cannes Film Festival Premiere: “Very creative, very funny, very enjoyable films... it was a pleasure to judge. I really got a good sense of emotion and feeling - and that's what cinema is all about.”