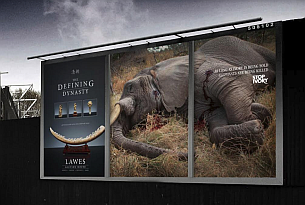 Following the recent and welcome announcement that the UK government is planning to ban ivory trading, conservation charity Stop Ivory is keeping up the fight to see the proposals for a comprehensive ban written into UK law, and is challenging other nations to follow suit, with a hard-hitting new campaign.
Most people do not make the connection that when they buy ivory, whether a tiny trinket or larger item, the source is invariably a butchered elephant.
The UK Government recently announced plans for a strict UK ivory ban, but there are still many countries where trading ivory is permitted.
With the convening of the Illegal Wildlife Trade Conference 2018 in London in October, this campaign seeks to use a critical opportunity to appeal to all countries that still trade ivory to follow the UK’s lead and implement a ban, as well as urge the UK government to pass their proposal into written law as soon as possible.
Called “Going, Going Gone”, the campaign consists of a film and digital billboards, delivered by Clear Channel, across the country. The film takes place in an auction house with a frantic auction taking place for a large, carved ivory tusk. As the bidding concludes and the gavel falls, a gunshot is heard and, with a spatter of blood, the buyer is suddenly confronted with the elephant that is dying for her prize.
The end line reads: “As long as ivory is being sold, elephants are being killed”  before calling for a total ban in 8 European languages.
There will also be 2 special build units installed. One which takes over the corner of a building to deliver the dual message and one which appears to hijack a 48 sheet by installing artificial frame dividers.
Lucas Peon, Executive Creative Director at J. Walter Thompson, said: “There is a lack of understanding amongst the public regarding the UK and Europe’s role in the increase of illegal poaching – people do not see a link between a piece of ivory and slaughtered elephants.  We want to get word out before populations are irreversibly lost to the illegal trade in ivory.”
John Stephenson, Stop Ivory’s CEO, said: “An elephant is slaughtered every 15 minutes for its ivory.  The international trade in ivory is illegal, but many countries continue to allow trade within its borders - including trade in antiques.  The existence of this “legal” trade provides a hiding place for illegal ivory, and undermines the message that only when the buying stops will the killing stop.  Time is running out: the trade must stop now.  China and the UK have shown the way - the EU and other countries must follow.
After DEFRA’s public consultation on a ban, which, with over 70,000 responses, was one of its largest consultations on record, on April 3, Secretary of State for the Environment Food and Rural Affairs Michael Gove announced plans for a new UK ivory ban, stating that the new law would “reaffirm the UK's global leadership on this critical issue, demonstrating our belief that the abhorrent ivory trade should become a thing of the past”.
view more - Creative

Creatives: Will Wright and James Lucking