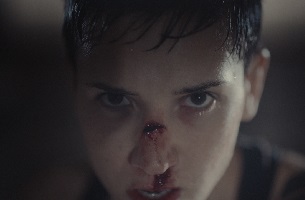 Soho-based editing house Stitch has just finished editing the latest Bodyform campaign. The powerful commercial is all about blood, with bloody faces, bleeding noses, gashed hands and more - it certainly doesn't hold back. Directed by Jones+Tino from Stink and edited by Leo King, it’s a far cry from the 'rollerblading' ads of the past.

Bodyform was an unusual job to cut according to Leo King who comments: “The way Jones+Tino work, is they get a copy of the rushes to put together rough cuts themselves. We therefore had Tino in Brazil doing a cut, Jones in London doing his own cut and me in Stitch doing a cut! After meeting up to compare, we spent a week in Stitch taking the best elements of all to craft a mega edit! It's an unusual way of doing things, but we are all really happy with the end result, so it was worth it!”

The campaign has gained critical acclaim and caused a stir on Twitter, especially for putting an end to the use of blue liquid to represent menstrual blood.  Congratulations to all involved.