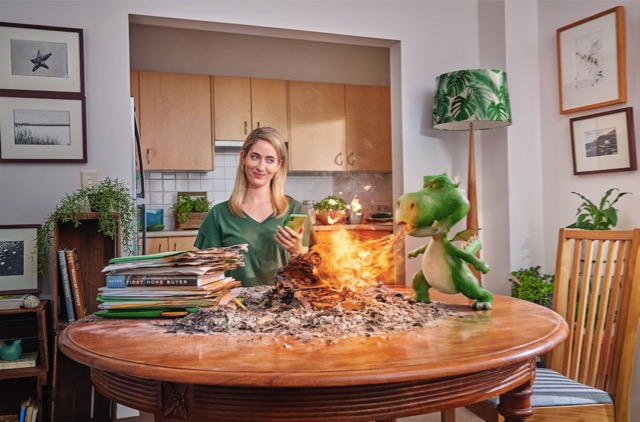 St.George is encouraging home buyers to 'Go Paperless', with an integrated campaign promoting its new online home loan application tool, which simplifies the process and helps educate buyers along the way.

Created by Saatchi & Saatchi, part of the Publicis Groupe, the campaign features the bank's well-loved character, Little Dragon, appearing alongside first-time home buyer Liz, who's frustrated and overwhelmed by the amount of paperwork she's facing for her home loan application - that is, until Little Dragon, in his usual cheeky manner, solves the problem for her.

The campaign is rolling out across broadcast television, social, digital, online video, radio and in-branch.

Says Kate Kissane, head of brand and advertising, St.George Bank: "The 2018 St.George Home Buying Survey suggests that Aussie home buyers, particularly first home buyers, are still optimistic about owning a home, but the actual application process is forcing them to throw it in the 'too hard' basket. 48 per cent of first home buyers say they've put off buying a home because of the complexities of the application process. So we've built an entirely new online application platform to combat these frustrations and put the power back in the buyers' hands, by going paperless."

Says Mike Spirkovski, chief creative officer, Saatchi & Saatchi: "The home buying process can be really complicated, so it's great that St.George Bank has developed this tool to help people overcome one of the big obstacles. The Paperless campaign is a fun extension to the well performing Little Dragon campaign, showing home buyers that there's a way to avoid all those endless paper forms."