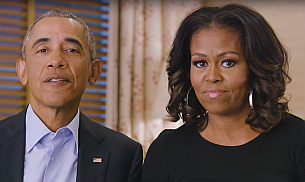 Produced by Bullitt Entertainment, the moving tribute to envisioning change encourages the public to make their voice heard through personal posts and positive action.

“I am honoured that I have been chosen to be a part of the team to bring Stevie Wonder’s vision to life, and help keep the dream of Dr. Martin Luther King Jr. ever present. The project is so vital to the unity that we still strive for today, and serves as a reminder that we are all one human race,” comments Vernon. “Together we can make the impossible possible, breaking the chains of discrimination for all groups, and create peace and harmony across the globe.”

“To see such an army of talented artists, businessmen and women, politicians, thought leaders and influencers lend their voices to this cause speaks to the value of Dr. King’s message today as much as ever,” comments Bullitt Chairman Todd Makurath. “We at Bullitt are pleased to have been able to play a small part in helping to carry that message to the people of the world.”

From branded content to short films and episodic series, Candice Vernon is driven to create stirring and engaging narrative content.  Among her noted projects, Vernon wrote, directed, and produced “Make America Great?” an award-winning short film that screened worldwide in the wake of the 2016 elections. A former advertising Executive Producer, Vernon has worked on projects with clients such as The Dollar Shave Club, Time Warner Cable, Jockey, and many more. Following production on Dream Still Lives, Vernon signed with Bullitt for branded projects and advertising.

“We’re thrilled to welcome Candice into the Bullitt family with the launch of her first project, Stevie Wonder’s celebration of the message and legacy of Dr. King,” noted Bullitt President/EP Luke Ricci. “The video is a powerful reminder that Dr. King’s dream is just as meaningful now as it was when his life was cut tragically short 50 years ago.”