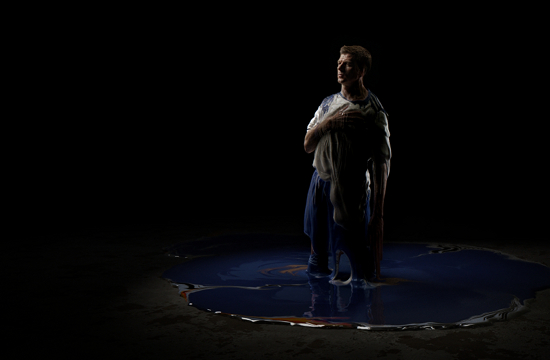 Grey London has launched an innovative, content-led campaign for Lucozade Sport – the official sports drink of the England football team – ahead of the 2014 World Cup, which centres around the brand’s ‘Conditions Zone’ – a state of the art 5-a-side venue that gives amateur players the chance to play in the same heat and humidity that their footballing heroes will face this summer in Brazil.

The film opens with Gerrard looking every inch the captain: standing tall, chest out, hand on badge. As the camera pans in, the hairs on the back of his neck prickle in a wave of heat and a single bead of sweat forms on his brow, running down his face before splashing onto the ground. A voiceover – narrated by actor Benedict Cumberbatch – kicks in:

‘As the temperature soars, and the humidity rises; bodies will weaken, performances suffer’. Through a haze, we see Gerrard begin to wilt. Before long, he’s a shadow of the figure he was; a limp caricature in a pool of sweat. Suddenly, the melting stops – then quickly reverses – as the voiceover continues: ‘Only those who know how to beat the conditions will rule’. The film ends with Gerrard tall once more, a steely determinedness in his eye.

The campaign’s focal point is the Lucozade Sport Conditions Zone,. The five-a-side venue is based in London’s Canary Wharf and replicates the conditions England will experience this summer in Brazil: temperatures of up to 32 degrees with 76% humidity.

During each game, players will be monitored by a sports scientist, receiving analysis on performance variables including heart rate exertion, distance covered, weight loss and sweat loss before receiving a scientific analysis demonstrating the impact the conditions have had on their performance. The facility will be open 3rd-24th June and is free to play in. For more information, visit www.lucozadesport.com/conditionszone

The TV spot was directed by Chris Cairns through Partizan, with CGI and post production from Time Based Arts. A raft of additional content – focussed on the effect extreme conditions can have on your body – will be rolled out over the coming weeks.

Darren Wright, creative director, Grey London, says: “We wanted to address the controversy around England’s chances against the conditions in Brazil – by giving people the chance to experience the extreme heat and humidity first hand. With the film, we wanted to visualise the effects of those conditions – and what more striking way than to ‘melt’ the England captain. It’s a great example of creating an immersive experience that connects brands to cultural conversations.”

Chris Cairns, director, adds: “What does a human being melting look like? And how do we achieve that look on film? We investigated making and melting wax models before settling on a fully CG approach – we didn’t want to be slaves to physics in our quest for the best look. As well as standard shots, we captured an incredibly high-resolution 3D scan and texture of Stevie G to give us complete control over the melt. My favourite projects combine the aesthetic and the technical and this one had a perfect balance of the two.”