Steve Soto Gives the City of LA Some Gears Ink 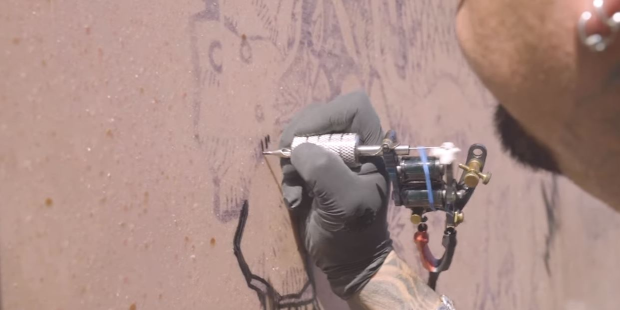 Gears Ink: Inking LA is a first-of-its-kind, live-tattooed OOH installation promoting the launch of Gears 5. To the fans of Gears of War, the franchise is more than just a series of video games. In fact, the stories and characters of Gears mean so much to fans, many of them choose to brand their flesh forever with Gears of War ink and tattoos. But, since the canvas for these tattoos is literally the human body, typically they can only be shown off in a close-up, one-to-one, or small group setting. To celebrate the launch of Gears 5, Xbox wanted to showcase this hardcore love for the game, on the biggest stage possible. So, instead of giving a fan a tattoo, Xbox gave the city of Los Angeles some Gears Ink of its own. Xbox and 215 McCann partnered with Hollywood fabricators to create a canvas of synthetic human skin that could be tattooed by real tattoo needles, just like actual human flesh.

For 3 days, in the middle of Hollywood Boulevard, master tattoo artist Steve Soto and his crew from Goodfellas Tattoo Studio, worked 8-hours a day to live-tattoo this large installation. At the end of the three days, Steve and his team put the finishing touches on a Gears of War tattoo that LA could wear with pride, just like thousands of other Gears fans. The campaign is a continuation of the “Bound By Blood” campaign, which 215 McCann launched at E3, and currently running globally on paid media. It includes TV, cinema, digital, OOH, social, PR, and this live tattoo installation. Gears 5 is available to play now.