NBA star becomes a Librarian to kick off new season 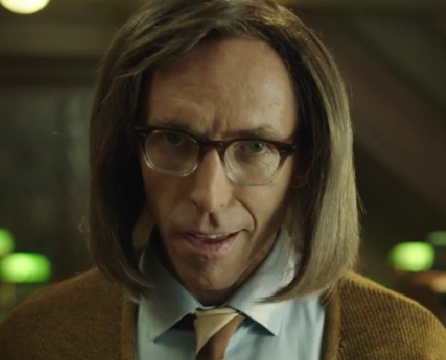 Founded by a group of technology MVPs from the likes of Yahoo!, Apple, DreamWorks Animation, Electronic Arts, and Salesforce, TopLine Game Labs has enlisted two of sports’ greatest MVPs - Steve Nash and Tom Brady - as the faces of its first advertising campaign for its short-duration fantasy sports game destination and app, DailyMVP.

In the first installment of “Have an MVP Day,” the all-star point guard for the Lakers sports a wig to transform into a librarian who can’t keep his excitement quiet after a DailyMVP victory.

“Fantasy sports are a big reason why fans follow sports so closely on a daily basis.  And whether its fantasy basketball or playing in the NBA, it's all about the team you’re working with,” noted Nash.  “That's why I'm really excited to be working with the MVP-level talent at TopLine Game Labs.”

“We wanted to create a fun and engaging experience designed for people to enjoy every day, whether on the go or at their desk, against friends or other sports fans. DailyMVP offers a new, fast and exciting way to play fantasy sports,” said David Geller, CEO of TopLine Game Labs. “Of course not all of us can be actual MVPs like Steve Nash or Tom Brady, but with DailyMVP, we think we can infuse a little MVP feeling into someone’s day.  In these ads you’ll see what happens when MVPs like Nash and Brady transform from ordinary to extraordinary with a little help from DailyMVP.”

A short-duration fantasy sports game with contests lasting from one day to one week long, DailyMVP eliminates complicated salary caps and the lengthy time commitments of season-long fantasy sports leagues with football, baseball, and basketball games offered during each league’s season. Contests are quick to set-up and allow users to pick the players they want and easily challenge friends or random opponents in head-to-head or larger league contests.

“The excitement of DailyMVP make fans feel like MVPs,” said Jamie Barrett, Founder/Creative Director of barrettSF. “In ‘Have an MVP Day,’ we played on this transformation to turn MVPs into everyday fans, bringing to life the idea that the thrill of a win can make even a librarian feel like Steve Nash. We're grateful to TopLine Game Labs for being such trusting clients, and to Steve Nash for his willingness to wear a horrible wig.”

In addition to partnerships with Nash and Brady, DailyMVP is the first daily fantasy sports brand to become an officially licensed partner of the NFLPA (NFL Players Association), bringing players even closer to fans with headshots embedded in DailyMVP’s football contests.