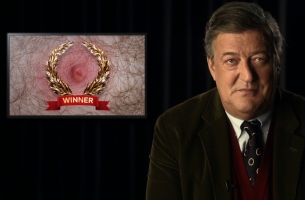 As runners everywhere pound the streets training for the 2015 Virgin Money London Marathon, help has arrived for those who are running for charity and looking for a creative way to raise more money.

Fry, who is also president of mental health charity Mind, donated his time to record names, locations, charities and events for Virgin Money Giving – enabling the creation of an advanced online tool, myfundraisingfilm.com, which allows users to choose from a huge number of combinations to generate and share their own humorous, tailored fundraising video.

The result of an ambitious collaboration between m/SIX and digital production company MediaMonks, myfundraisingfilm.com is easy to use, generating a fun, bespoke video in a matter of minutes, which can be shared online, uploaded to YouTube and emailed to friends and family.

The tool aims to help marathon runners collectively raise millions more for charity, as well as offering a fun, creative way to take the slog out of fundraising, so they can focus all their energy on training.

Stephen Fry said: “Running 26.2 miles is an arduous feat of endurance and thousands of brave souls put themselves through untold pain just to raise money for charity. These personalised videos may just take a bit of the load off their fundraising endeavours. They help to make fundraising easy and a bit of fun. I hope people really enjoy them, before making that all-important ‘click’ to donate.”

Tom Shebbeare, Chairman at Virgin Money Giving, said: “It’s a universal truth that marathon runners put themselves through absolute hell, but then send the usual, boring old email asking for sponsorship. We wanted to give everyone the opportunity to make a real impact with their own creative fundraising requests, and Stephen Fry was generous enough with his time to help us do that.”

Jess Burley, CEO of m/SIX, said: “Working with Virgin Money Giving, MediaMonks and Stephen Fry on this technically ambitious and extremely worthy project has been a delight. We’re very proud to have been involved in creating something which will help thousands of runners raise millions more, more creatively, for charity.”