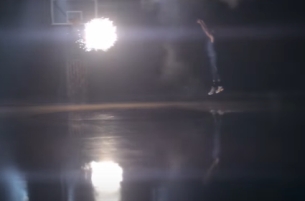 Throughout the past few months, Droga5 has been producing a ton of work for several sectors of the Under Armour brand: Women's, Training, Global Football. Now, Droga5 is launching a beautiful film for the brand's Basketball division featuring Stephen Curry and Jamie Foxx.

But more importantly, Stephen Curry redefined the game of basketball. Curry proved an undersized guard could dominate the game and change the sport in the less than a second.

Under Armour and Droga5 decided to kick off the 2015-16 NBA season by reminding the world how Curry and his miraculous shot changed the game.  The agency worked with award-winning director Henry-Alex Rubin and Oscar-winner Jamie Foxx to showcase Curry’s generational talent by giving him only a fraction of a second to see the rim before releasing his shot. What ensues is an explosive display that reflects what makes Stephen the catalyst for the new era of basketball.

The film features the “Iron Sharpens Iron” Curry Two, the first colourway of Stephen’s second signature shoe, which he will wear during the kick-off to the NBA season and will be available on UA.com and select retailers around the world on Oct 24th. Additional colourways of the Curry Two will release throughout the season.