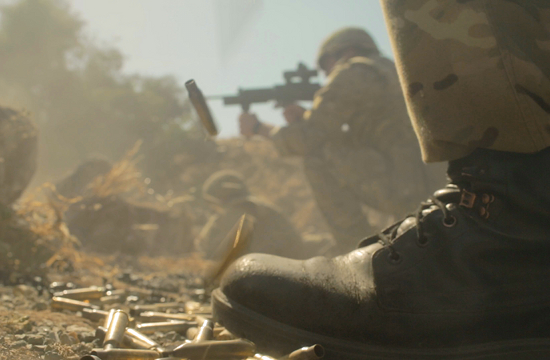 Britain’s Army boots have hit the ground today as part of a brand new “Step Up” recruitment campaign which will hit TV screens across the country tonight.

The “Step Up” campaign is part of a wider recruiting programme, designed to bring 10,000 new soldiers and officers into the Army over the coming year. It aims to dispel the misconception that the Army is not hiring as new statistics reveal that only half of all people surveyed realised that the Army is looking for new recruits.

The campaign, aimed at 16 to 24 year olds, will feature new television adverts commissioned by Capita plc. as part of its contract with the Army to deliver recruiting services. Made by JWT London, the adverts show the audience, through the perspective of a pair of iconic Army boots, the potential journey that any soldier might take whilst following a career in the Army and highlighting what it can offer new recruits. This will be supported by other initiatives including recruitment clinics in nearly 400 location across the UK in partnership with Jobcentre Plus.

The new adverts will run as a 90 second cinema ad in Scotland and a 60 second cinema ad in England and Wales from 24 May. There will also be integrated multi-channel above-the-line and below-the-line communications including Facebook and Twitter activity where potential recruits can question current soldiers about their careers in the Army. Printed toolkits will also be provided to support the Army’s regional recruitment surges.

The campaign and the clinics form part of an overhauled system designed to streamline recruitment. Army jobs will now be advertised in job centres, and applicants will be able to apply online from anywhere in the UK. The vast majority of the application process is now done online. All applications are administered through the dedicated National Recruiting Centre, where a mentor is assigned to each applicant to guide him or her through the process of joining the Regular Army or the Reserves.

Brigadier Andrew Jackson, the Director of Recruiting and Training for the Army said: “We are always looking for talented, young people to take up the challenge of a career in the Army. No matter what your skills or background, the Army has something to offer you and an Army job provides opportunities to learn much more beyond military skills. It will develop you and show you the strengths you didn't know you had. These statistics show that one in five people would consider joining the Army so we need to encourage those individuals to come forward and find out more about joining us.

“No matter what its size, the Army is always recruiting to ensure we have enough quality junior ranks and young officers to sustain the organisation and keep it ready for the challenges of the future. We pride ourselves on recruiting individuals who demonstrate talent and promise, and then provide them with all the training and development opportunities they need. Today is about helping them take the first step toward a successful career in the Army, and beyond.”

Zoe Boustead, Marketing Director, for Army Recruiting Group said: “The campaign aims to illustrate people that everybody has what it takes to join the Army and it’s just about having the confidence to take those important first steps. The creative idea behind the campaign is to put members of the public into the boots of an Army recruit and show them what a potential career in the Army could look like. Jobcentre Plus clinics up and down the country aim to open people’s mind to the idea of a career in the Army and give them the opportunity to explore what the Army can offer them.”

For more information about the exciting job opportunities with the Army, visit http://www.army.mod.uk/join/StepUp or call 0845 600 8080.