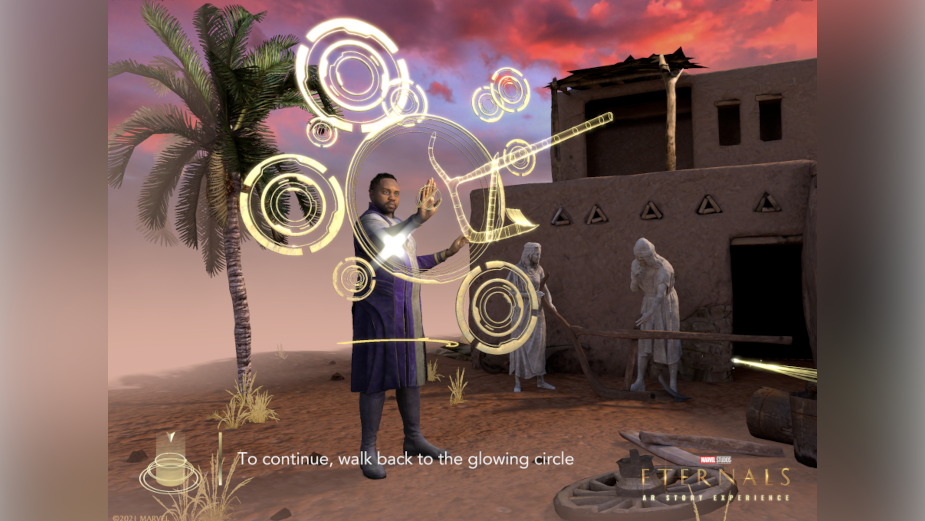 Marvel Studios looks to the future, with a first-of-its-kind Augmented Reality (AR) story experience. Step into the film with Marvel Studios’ Eternals: AR Story Experience for an epic AR adventure. Travel through time and space to meet the characters and discover their backstory like never before. This immersive experience allows you to explore the world of the Eternals and become a part of the action, before seeing the film in theatres starting November 5th. The free iOS-exclusive mobile app is available globally, in 13 languages, in the App Store on October 27th.

The experience gives an in-world primer on how the Eternals helped shape Earth's civilisation over the past 7,000 years. As you travel back in time with Sprite, an Eternal and master storyteller, learn how these champions became a part of Earth’s history. Using your iPhone or iPad, witness their story, cosmic powers, and maybe learn some secrets along the way.

"This experience explores AR as a storytelling medium. As you interact, the narrative unfolds seamlessly all around you. It's an immersive cinematic experience in your own home," says Daniel Baker, senior producer and manager of technology innovation.

The latest technologies were used to deliver state-of-the-art storytelling. The team used volumetric capture to record actress Lia McHugh’s performance from over 100 camera angles, and created a 3D representation of her character Sprite that appears right in your very space.

Brand new processes were also developed to display film-calibre VFX on mobile devices, in real time. “After working in the entertainment tech industry for over 30 years, it’s exciting to see that mobile AR technology can finally deliver a cinema-quality experience,” says Mark Mine, director of technology innovation.

Using the latest Apple features makes the experience as seamless as possible. To preview the app, a user only needs to scan the App Clip Code with their iPhone to launch a fast, lightweight version of the experience. All of the virtual characters and experiences you see in the app are placed realistically into your surroundings using ARKit, Apple’s developer framework built from the ground up for AR on the iPhone and iPad.

To create this unique experience, Marvel Studios joined forces with XR experts from the Technology Innovation Group at Disney Studios Content. New tools and pipelines were developed to deliver the stunning visuals and interactive narrative.

The whole team, from creatives to engineers, collaborated from around the globe to bring “Eternals” to life in AR. “We’re telling a true Marvel Studios story in a way that fans have never seen before,” says Dave Bushore, VP of franchise creative and marketing for Marvel Studios. “We're very excited to be at the forefront of this ground breaking form of storytelling, and we're already developing more of these types of immersive experiences that deepen the fans’ connection to the Marvel Cinematic Universe."