The OZO camera debuted in North America in November 2015 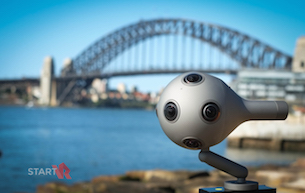 Sydney, Australia-based virtual reality studio Start VR today announced its partnership with Nokia Technologies, making the studio one of the first in the Australasia region to showcase the OZO camera – a groundbreaking stereoscopic virtual reality camera for professional content production. The OZO camera debuted in North America in November 2015; this partnership will usher in new productions at Start VR, which will be among the first to benefit from the camera’s capabilities, including spherical and stereoscopic video capture with spatial audio array.

“Start VR is a company turning out an impressive slate of VR projects, from interactive films to brand stories to business and educational VR applications,” says Malachi Bierstein, Nokia Technology Head of Sales, Digital Media. “After meeting the company’s highly talented Head of Content Martin Taylor, Start VR became our top choice for a collaborative partnership whereby the studio would champion the OZO camera in the Australasia region. What we are impressed with is Start VR’s cinematic approach to VR and their active work in developing the VR community in Australia and, along with it, the OZO.”

Start VR’s Head of Content, Martin Taylor, included, “This camera is nothing short of amazing; beautifully built and really does mark the arrival of true cinematic VR. We are very excited to put Nokia OZO through its paces in a series of exciting VR projects in the coming months and to demonstrate the camera at our scheduled conferences and showcase events throughout the year. We cannot wait to share the results.”

Adds Start VR Co-founder and CEO Kain Tietzel, “We are honoured to be working with Nokia in this way, to be some of the first in Australia to showcase the groundbreaking OZO camera. Our chief storyteller Martin Taylor has been championing OZO as a way to significantly improve the quality and scale of a wide range of VR productions.”

"Start VR invites Australian brands and content creators to partner with us on test shoots over the next few months, designed to explore the advanced capabilities of the new VR camera technology," Tietzel states.

Using cutting-edge technologies offered by the OZO, Start VR will continue to pave the way in the virtual reality industry by creating compelling and innovative VR experiences. The OZO extricates itself from competitors through its ability to produce VR live streams, which no other virtual reality camera has been able to accomplish. The camera features real-time VR preview, 3D audio support that syncs with 360-degree video capturing, full compatibility with professional workflows and multiple head-mounted displays, and the ability to reduce post-production time, complexity and cost.