7-Eleven campaign by Stardust uses social media as its crux 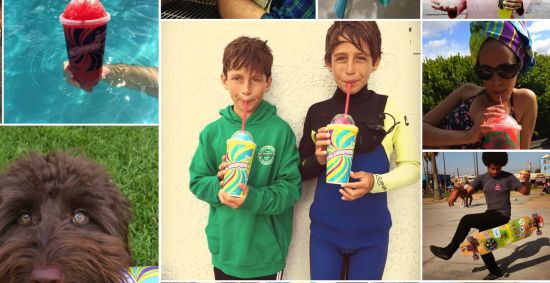 The creative team at Stardust has just completed an innovative commercial campaign for 7-Eleven, featuring the iconic Slurpee. Created primarily for broadcast, the campaign is a Social Media-inspired collage of stills, video, and stop-motion sequences that capture the spirit of a “Slurpee Summer.”

Rather than take the standard filmmaking approach, Stardust Director/Partner Seth Epstein embraced the “social” nature of the commercial by sharing the helm. “I told the on-camera talent, the agency, and even the crew to bust out their phones and be part of the process of making the commercial,” explains Epstein. “I thought: if we are trying to capture the feeling of Social Media, why not just let the entire shoot become social and participatory? It was structured, but experimental all at the same time.”

Led by Epstein, Stardust gathered more than 30,000 photos in just two days. “The original goal was to ensure we captured 5,000 images,” adds Dexton Deboree, Managing Director/Partner at Stardust, “We ended up with truly, socially-engaged photos as our Photographers and DPs were part of the subject matter and created their own content organically by simply having fun in the most natural way with one another. Our goal was to truly embrace the spirit of the message we were hoping to convey; and we think it worked.”

The Stardust team reverted back to more traditional filmmaking techniques in post, first editing the photos together and then building the complex grid and stop-motion animation sequences in After Effects. A small, crack team of specialists at Stardust worked around the clock to deliver the film six days after it was shot.