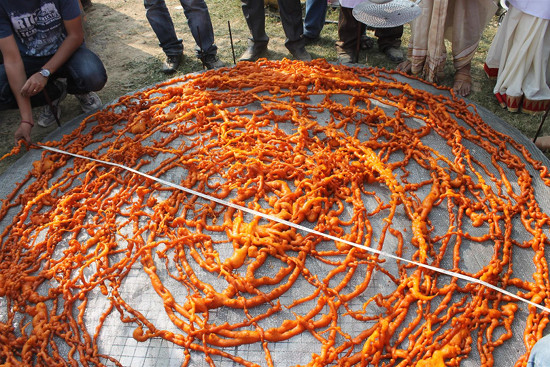 Star Jalsha, Bengal's most popular Bengali GEC wanted to come up with an activation idea that would link back to their top TVR show, "Tomaye Amaye Miley" in which Nishith, one of the central characters had just won the accolade of 'The World's Top Cook.' DDB Mudra Kolkata team executed an activation of making of the World's largest Jalebi for Star Jalsha.

The objective of this activation idea was to share the celebrations of Nishith's achievement with the viewers and further popularize the serial and increase recall.

The challenge was to come up with something innovative that would be relevant both to the viewers and to the topic and theme of the serial. Whatever was done had to have the 'never before done' factor, yet be inextricably linked to the storyline and theme of the show. This was a daunting task which was sought to be tackled through an innovative idea.

Keeping in mind the boundaries laid down by the theme of the show and the fact that it had to be celebratory it was decided to organize the creation of the largest 'Jalebi' (a Bengali sweet in the form of whorls and spirals) in the world. This was especially relevant as Nishith, the central character is a sweet-maker in the show and also because traditionally Bengalis celebrate with sweets. 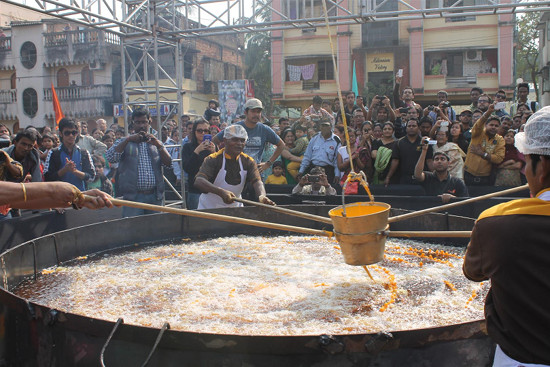 Star Jalsha & DDB Mudra Kolkata organized the making of the largest Jalebi (a traditional Bengali sweet) in the world which was a challenging task in itself. The event was well popularized and thousands of people, including the stars of the show, assembled at the venue to witness a record-setting phenomenon. After completion, the Jalebi was measured and at 8ft. 2 inches (dia), was declared to constitute an official new record by the Limca Book of Records authorities.

Commenting on the initiative Sumanta Bose, Sr. V.P. Star India stated that, 'At Star Jalsha it has always been our endeavor to live up to the brand promise of 'Chalo Paltai' and engage our viewers in innovative ways every time. Tomay Amay Miley, which recently went through a story-turn, received immense support from the viewers. Star Jalsha gave back the love to its viewers through the on-ground initiative, where the crowd became part of the victory celebration along with Nishith and Ushoshie, the lead characters of the show.'