Stamma and Wikipedia Strikes Out Harsh Language Around Stammering

Find the Right Words from VMLY&R, aims to change public perception and start a new conversation about stammering 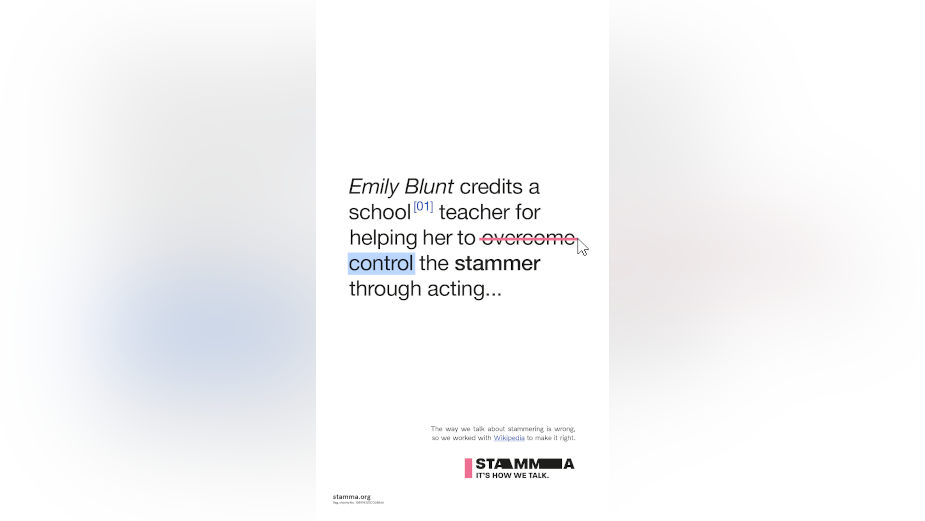 Stamma launches a global campaign, created by VMLY&R and in collaboration with Wikipedia, to change the public’s perception of stammering. ‘Find the Right Words’ aims to start a new conversation around harmful  biased language, one which has never entered the public eye when it comes to stammering.

Between 1-3% of adults stammer, yet the condition is commonly misunderstood, and people who  stammer are often perceived as ‘weaker’, ‘less confident’, and ‘less able’. While these characterisations are usually unconscious, they can profoundly affect the lives of people who  stammer, from careers to social lives and mental well-being. This bias also infects the language used to describe the condition, as well as their lives and accomplishments, when after all, it’s just how  someone talks.

Working closely with the community at Wikipedia, Stamma and VMLY&R edited misleading language  used on the platform to describe those who stammer. These included historical entries like that of Lewis Carroll, but also household names of today such as Ed Sheeran and Emily Blunt.

Jimmy Wales, founder at Wikipedia, added: “No one should feel like they are worth less as a person because of something they cannot change. The project really speaks to the nature of Wikipedia, not just as a learning tool, but as an ever-evolving platform that needs to accurately reflect the world we  live in.”

The OOH and global social campaign shows the language used on Wikipedia to describe people that  famously stammer, before and after editing took place. The campaign also includes a film documenting the project, narrated by actor, podcaster and Hip-Hop icon, Scroobius Pip, a fellow stammerer.

Stamma also launched Editorial Guidelines to create lasting change and enable everyone to find the  right words when thinking or speaking about stammering. The guidelines have been shared with key  stakeholders in the publishing, creative, recruitment and education sectors, asking them to set an example.

Jane Powell, CEO at Stamma, said: “We need to change the language used to describe stammering, remove the negativity, and create a culture of respect and acceptance. Stammering is just how some people talk,”

Daniel Liakh, creative at VMLY&R, commented: “I’ve been stammering for as long as I’ve been talking. What helped me overcome the shame of talking differently are the facts around what stammering actually is. I hope to get more people to understand how to talk about something that can be pretty hard to talk about.”

‘Find the Right Words’ launches with an online film and a social and OOH campaign in the run-up to International Stammering Awareness Day on Thursday 22nd October. It is supported by Stamma’s media partners, JCDecaux UK and Ocean Outdoor.