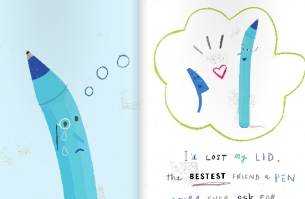 St John Ambulance has launched a fun new e-book, created by BBH London, to help parents and children learn first aid together. The free picture book, The Pen That Lost His Lid, has been released to celebrate the success of the charity’s recent campaign, The Chokeables, which has now been credited with saving the lives of 36 children. You can view the book online here.

In the picture book, which can be read with children aged 3-7, Pen desperately searches for his best friend Pen Lid, who seems to have disappeared. He meets several characters from The Chokeables video on his quest, until he finds a baby who’s choking. Thankfully, the baby’s mum knows what to do and… well, we don’t want to spoil the ending. The book is available to download for free and St John Ambulance is hoping that as well as being entertaining for younger children, it will help teach more people what to do in this kind of emergency.

Sue Killen, CEO at the nation’s leading first aid charity, said: “The success of the campaign has been staggering, with over 7 million views in our first few weeks, and we are thrilled that people have got behind the campaign. It’s thanks to them spreading the word that so many people have been able to save a child from choking.

“The Pen That Lost His Lid is a new chapter for The Chokeables, and we hope that lots of parents will download it to read with their children. You’re never too young to learn life saving skills and we hope the book and the video continue to make parents feel more confident and able to act in a choking emergency.”

Tamar Vellacot, 19, who saved her baby Emilie after seeing the advert, said: “I know first-hand how terrifying it is to see your baby choke, but I’m so glad I remembered what to do from The Chokeables video. I have already downloaded a copy of The Pen That Lost His Lid to read to Emilie – it’s such a lovely picture book and it’s great that it teaches a skill too. I hope lots of parents download it and learn the same skill that I used to save Emilie’s life.”

The Chokeables – a 40 second ad that demonstrates how to save a choking baby – has been viewed more than 7.7 million times across Facebook, YouTube, and Twitter since it launched on 11 January. The video features animated choking hazards – a pen lid, a princess, a marble, and a jelly baby – who are fed up of choking babies and have come together to teach people what to do. The advert also appeared on television and it is estimated that nearly 30m people saw it during its three months on air.

The campaign was created after new research showed that 79% of parents did not know how to help a choking baby, despite 58% saying it was a major concern. 40% of parents reported seeing their baby choke. The video is voiced by David Walliams, Johnny Vegas, Sir John Hurt, and David Mitchell.