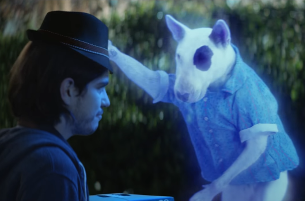 In the new Super Bowl spot, “Ghost Spuds,” Spuds MacKenzie returns to visit an unsuspecting man, and along the way, helps him realise that sharing a Bud Light with friends is more than just drinking beers; it’s about creating meaningful memories with friends.

“Bud Light has been present at memorable moments – big or small – among friends for decades,” said Bud Light vice president Alex Lambrecht. “There’s no one better than Spuds to celebrate Bud Light, and remind everyone that we don’t just make beer, we enable moments that build and strengthen friendships.”

The release of “Ghost Spuds,” created by Wieden + Kennedy New York coincides with the 30th anniversary of Spuds’ first appearance in Bud Light’s Super Bowl XXI spot. The beloved Bull Terrier first appeared in the Super Bowl in 1987 and quickly won over the hearts and minds of Bud Light drinkers everywhere, and cemented his status as a pop culture staple. His affinity for living life to the fullest with friends, both old and new, embodied the spirit of Bud Light that we still honour today.

Although Spuds will be shedding his former persona, his message of lasting friendships is one that intends to resonate across generations, and integrate with Bud Light’s broader “Famous Among Friends” brand campaign. Since 1982, Bud Light has been the most social, sessionable beer on the market, and the ultimate ice-breaker among strangers who are just friends you haven’t had a Bud Light with yet. Spuds is coming back temporarily to help spread Bud Light’s message of friendship in 2017 and after the Super Bowl will return to the after-life following the big game.

"It’s been 30 years since we last saw Spuds McKenzie. Or 210 if you are counting in dog years,” says Wieden + Kennedy New York executive creative director, Karl Lieberman. “Nevertheless, it was the right time to set the record straight about what Spuds always represented: bringing friends together.”

The ghost of Spuds is voiced by actor Carl Weathers, known for his roles in “Rocky,” “Happy Gilmore” and more. “Ghost Spuds” is the second spot in Bud Light’s recently launched campaign. The first spot, “Between Friends” aired during the AFC and NFC Championship games.