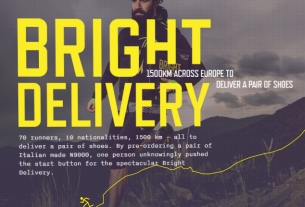 Sportswear fashion brand Diadora launches a new documentary and website celebrating its Make it Bright campaign. The campaign, devised by creative agency SMFB and creative production company MediaMonks, follows a pair of Italian-made N9000 as they travel from Diadora’s HQ in Caerano Di San Marco, Italy, to their delivery destination in Barcelona, Spain. However, rather than being delivered by post, the shoes were carried on foot by a spectacular relay run spanning nine days and nearly 1500 km.

The campaign was set in motion by an unknowing customer who placed the first pre-order of the shoes — with his doorstep as the final destination for the special delivery. The relay was ran by runners from around the world and could be followed through a microsite that offered daily footage, Periscope broadcasts, and live statistics surrounding the run which updated as the package progressed through Europe.

With the launch of the new campaign site, visitors can now re-live the experience through an online documentary, a TVC for Italian markets, and a wealth of content relating to the runners, the shoes, and their journey.

Romina Zanchetta, Head of Marketing and Communication from Diadora says: “Our aim is to give all aspects of life a sunny, upbeat twist. Being bright the Diadora way is all about shining a light on the pure joy of sports, rather than the performance, pressure and profit typically associated with the industry. And that means making the ordinary, extraordinary.”

Thomas Askim, creative director at SMFB, adds: “What makes this campaign special is that it was a live event production. It took a lot of planning, but we were producing on-the-go content for the entire run. People were able to track the package through what is likely the most detailed online delivery overview to ever exist.”

You can watch the documentary and re-live the run in its entirety here.