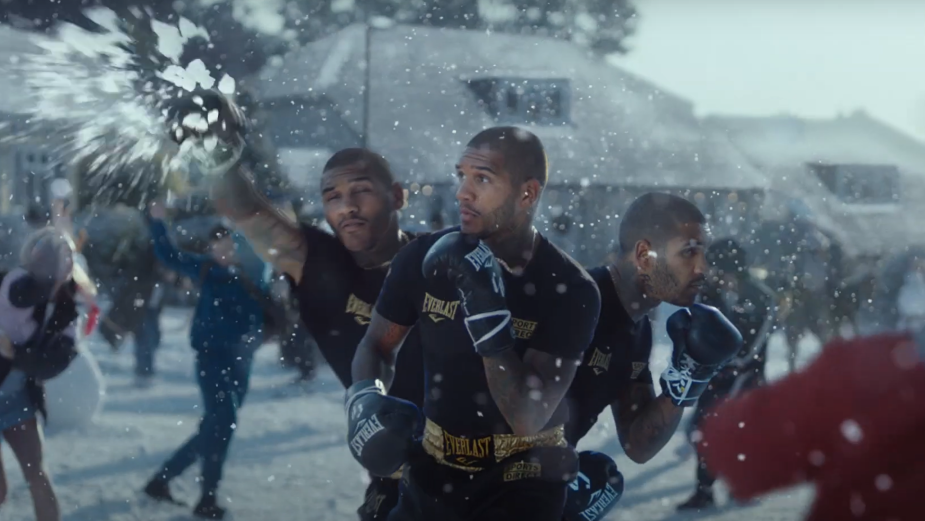 Sports Direct has today unveiled its action-packed 2021 Christmas campaign; ‘Go All Out’. The new ad is a high-energy, star-studded rallying call which aims to inspire Brits to get up off the sofa, go outside and play sport - even when the elements are against them.

Building on the success of Christmas 2020’s ‘Sports Starts Here’, which introduced the brand’s elevated ambition, ‘Go All Out’ cements Sports Direct as the ultimate destination for the gift of sport and fitness this festive season.

Set against the backdrop of a suburban street, the 60 and 30-second ads open with the campaign’s stars slumped in front of their TVs. As soon as snow starts to fall, the legends realise that ‘tis the season to Go All Out. One-by-one, they zip up, lace up and step out, trading sofa snoozes and family squabbles for an epic snowball fight - all while sporting this season’s incredible new collection.

Directed by duo Alex Motlhabane and Lewis Levi from THE REST, through Pulse Films, the snowball battle features a series of tongue-in-cheek moments - including Jordan Pickford using his ball-handling abilities to hit Jack Grealish with a cheeky shot from behind, Jessica Ennis-Hill masterfully evading a lineup of players armed with snowballs, and golfer Andrew Johnston showing off his skills by driving a ball high above the rooftops.

Lucy Kelly of Pulse Films said: “Alex and Lewis’ vision for this was clear from the get-go and we were thrilled to be able to facilitate it for Mox and Sports Direct. The campaign is lively and playful, with the duo bringing their music video energy to the cinematic spot. It also celebrates coming together, something which we know will be even more important and special to families and friends across the country this Christmas.”

Beckie Stanion, chief marketing officer at Sports Direct said: “After the challenges the nation has faced over the past year, we’re excited to encourage everyone to Go All Out this Christmas - with the help of some of the country’s biggest sporting legends.

“From your TV screens to your smartphones, Go All Out is a truly integrated campaign that shows up consistently, and natively, across multiple channels. We partnered with TikTok on a gamified effect that is interactive, authentic and rooted in our social community. The result is an engaging experience that taps into Sports Direct’s playful persona and the creativity and fun that exists on the platform.”

“The new ad continues to celebrate our brand purpose; championing the legend in everyone, no matter how skilled you are. Whether you’re working on legs like Grealish, sprints like Jessica Ennis-Hill or backhands like Emma Raducanu - it’s time to shrug off the cold, step out and make this season your best one yet.”

The awe-inspiring creative underpinning the ad was developed by MOX, the London-based agency appointed last September to launch the retailer's game-changing debut Christmas ad, and most recently its back-to-school campaign, ‘School Starts Here’.

Matt Bolton, creative director at MOX said: "It’s been an amazing journey with Sports Direct since our first campaign last Christmas, and we’re really excited to continue transforming people’s perceptions of the brand with another biggy.”

“This year we wanted to give the gift of sport and fitness to everyone across the country. But let’s face it, Christmas isn’t exactly an active time of year. Sofa slobbing...over-eating...endless box sets. But, sprinkle a bit of snow over the UK and everyone loses their s**t. It’s a thrill that brings out the inner child in everyone and that feeling is something we’ve tried to bottle in our film.”

From 19th November, TikTok users will be able to prove whether they are ‘naughty, Narstie or nice’ with a bespoke gamified filter, Narstie’s Naughty List. Inspired by Big Narstie’s cameo in the ad, the task is simple: test your heading skills for a chance to be included on the Naughty List.

Music Title: ‘Korobeiniki - Go All Out’