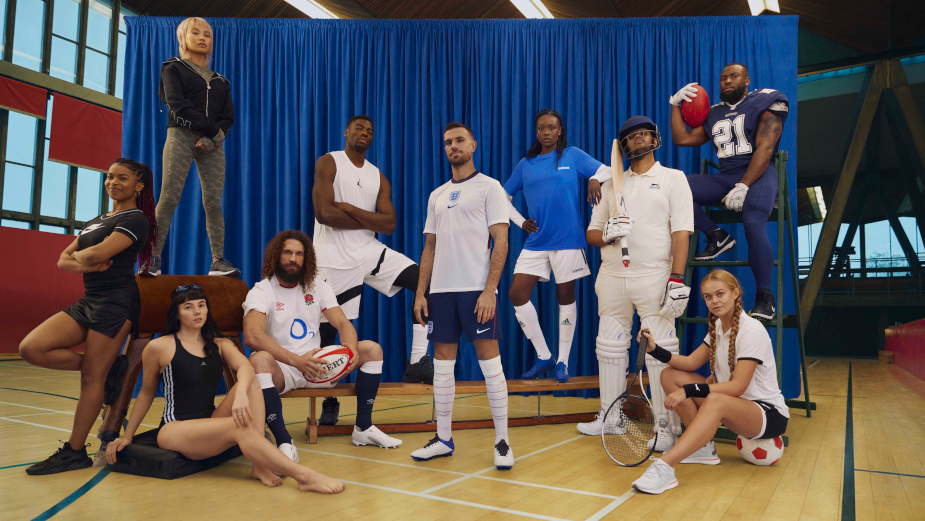 Sports Direct, the UK’s biggest sports and fitness retailer, has unveiled its first ever Christmas campaign, showcasing the brand’s fresh new positioning and rebrand for 2021 and beyond.

Launching from 18th November 2020, ‘Sport Starts Here’ is a high-energy, musical celebration of sport and fitness, where we see a range of sports being choreographed in a magical mashup. The film follows a female protagonist being asked the dreaded question by her mum ‘what do you want for Christmas?’, before exploring the realms of sport in every sense of the word - a big, powerful and exhilarating Christmas advert that leaves you energised and ready to move.

Liverpool FC Captain Jordan Henderson makes a cameo, as he’s seen being tackled by a female football player, alongside over 100 everyday athletes featured at the heart of the advert.

Creative agency, MOX London, led the campaign from strategy and ideation right through to execution, to bring to life what the modern meaning of ‘legend’ emotively signifies today. MOX lined-up a roster of some of the UK’s strongest creative minds including; Director Henry Schofield, best known for directing Stormzy’s iconic Vossi Bop music video, Toni Blaze, stylist to the stars and Editor-in-Chief of Wonderland magazine, Arnau Valls Colomer, an exceptional cinematographer who has shot videos for an array of musicians including singer Rosalia, Tame Impala, James Blake and Katy Perry and Benjamin Lennox, the infamous British photographer who has shot the likes of Dua Lipa, Charlie Puth, Kevin Hart and is a regular at Vogue.

More than 40 million people across the UK will see the ‘Sport Starts Here’ advert over the next month, thanks to the team at The Specialist Works who have handled the above-the-line media planning and buying. The campaign will be featured on flagship spots in the UEFA Nations League (England vs Iceland), I’m A Celebrity – Get Me Out Of Here! and Gogglebox via a highly engaging series of 60, 30 and 10-second adverts.

The track featured on the TV spot, and on social, an MC Fioti remix of the iconic Sister Nancy’s ‘Bam Bam Tam Tam’, emulates the film’s powerful energy throughout.

Directed by award-winning Director Henry Scholfield (best known for directing Stormzy’s iconic Vossi Bop music video), the 'Sports Starts Here' advert follows a female protagonist being asked the dreaded question by her mum, 'what do you want for Christmas?', before exploring the realms of sport in every sense of the word - a high-energy, musical celebration of sport and fitness, where we see a range of sports being choreographed in a magical mashup. A much-needed reminder of the positivity and energy that sport provides, as we look ahead to 2021.

The £5M campaign will elevate the brand’s retail proposition to become the ultimate sport and fitness destination on the high street, and demonstrates Sports Direct’s unique high street and online proposition, that caters for all sports and offers a dynamic range of iconic brands.

The campaign marks a new era for Sports Direct and feeds into the brand’s new purpose of using the power of sport to champion the legend in everyone.

Michael Murray, head of elevation said: “The evolution of our brand is the final piece of our elevation strategy. This is just the start of things to come for the new look Sports Direct.”

Beckie Stanion, chief marketing officer, said: “This is a hugely exciting time for the brand as it marks the first time consumers will be seeing our fresh new outlook via the TVC and on social. We wanted to create something that truly captures our new strategy and purpose; championing the legend in everyone, no matter how skilled you are. This campaign does exactly that, which is why we wanted to bring on the UK’s most creative minds and source real sport and fitness talent to bring our new narrative to life.”

Henry Scofield, director, said: "The brief was to make a Christmas ad that celebrates sport in a way that’s fun and iconic with a touch of mad, which is a bit like creative catnip for me. Time was tight, so we dug into some quick-footed creative collaboration with ECD Matt Bolton at MOX, with some excellent speedy production and post production from Academy and No8. That coupled with a client who was up for it, meant this was a very enjoyable film to make. I was super stoked to find Yamina (our very talented lead), who, with Bex and Amanda (her mates) and the other 97 other cast members, makes the spot ring with much needed Christmas cheer."

Matt Bolton, MOX, creative director/ co-founder said: “It felt like it was our duty to bring a little light relief and joy to people's screens this Christmas, given what a s**t 2020 has been. With Sports Direct’s ambition to champion the legend in everyone, it gave us a great platform to deliver on our collective ambition - deliver a real brand statement for Sports Direct, which redefines the retailer as we know it and sets the tone for the future of the brand. This is just the beginning of a defining journey for Sports Direct and we’re delighted that MOX is a part of it.”

Richard Maisey, group client director at The Specialist Works, said: “We've loved helping Sports Direct launch their first-ever brand campaign, and what a way to start. More than 40 million people will see it on TV alone over the next month”