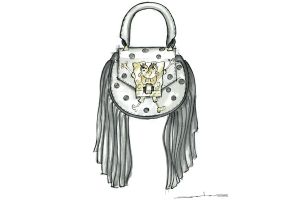 The new designer collaborations form part of the year-long SpongeBob SquarePants Gold international campaign from Nickelodeon. Across the next 12 months, Nickelodeon will celebrate everything that makes SpongeBob one of the most iconic animated characters in the world: his humour, optimism and heart of gold. The campaign will include activations on-air, online, and on social media as well as additional product and retail launches.

“SpongeBob is a design icon,” said Charlotte Castillo, SVP of brand management and creative for Nickelodeon and Viacom Consumer Products (NVCP). “The show’s art and lovable characters have been interpreted by designers into consumer products around the world, and we’re thrilled to have these six SpongeBob Gold fashion collection designers put their own spin on this global icon. What makes this collection special is the way each designer has incorporated SpongeBob into their own trademark style. By bringing SpongeBob into their world and incorporating the element of gold, our collaborators have created beautiful items unlike anything we have seen before.”