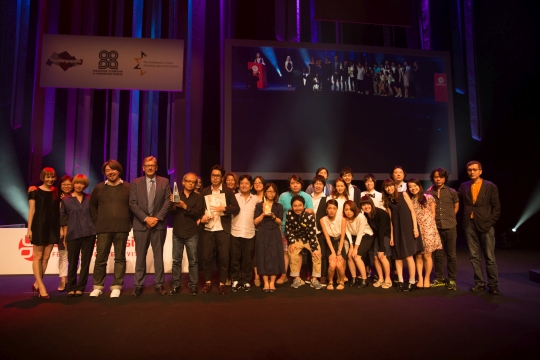 The Spikes Asia Awards Ceremony took place this evening, bringing to a close the 2014 Festival of Creativity. With 1,000 delegates in attendance, this year’s winners were honoured onstage at the Grand Theatre, Marina Bay Sands.

From an initial 4,984 entries across 18 categories, jurors choose a total of 472 entries to be awarded with the prestigious accolades. Commenting on the work, jury president Ted Royer said, “There was some really great work this year. Work that will inspire for years to come. It's great to see Asian creativity thriving.”

This year’s awards have been given as follows:

Film (sponsored by Revolver Will O’Rourke)

The Network of the Year trophy, sponsored by Airbag Productions, was presented to BBDO, with DDB coming second followed by Dentsu in third.

Chris Thomas, Chairman & CEO BBDO Asia, Middle East & Africa, said: “We are delighted that we are once again Spikes Network of the Year. Coming after Cannes Regional Network of the Year and Regional Network in the Global Effie Index this is a remarkable feat by the whole team across the region. Effectiveness is the objective; creativity is the strategy - the Work, the Work, the Work is working.”

Dentsu Tokyo were honoured with the Agency of the Year, sponsored by Airbag Productions. Runners up were DDB Group New Zealand, Auckland, coming in second place and Y&R Beijing in third.

The Independent Agency of the Year was taken by Fred & Farid, Shanghai with Lens Associates, Nagoya in second and The Monkeys, Sydney in third.

The Spikes Palm award, sponsored by Method Studios and given to the best Production Company, was awarded to Collider, Sydney. Exit Films, Melbourne came in second and Dentsu Creative X, Tokyo, third.

The Media Network of the Year trophy was given to PHD with OMD taking second place and in third, Starcom MediaVest Group.

During the awards, this year’s Advertiser of the Year Award, sponsored by Airbag Productions, was presented to The Coca-Cola Company – Asia Pacific.  Peter Schelstraete, Group Marketing Director, Asia Pacific Group, was present to accept the trophy on behalf of the company.

Delegates were able to celebrate their achievements and the end of an action packed Spikes Asia at the After Party, which was sponsored by Leo Burnett and held at The Clifford Pier, Singapore.

Full details of all the winners, as well as photos and videos from the event, will be available to view on the website at www.spikes.asia.