Space Odyssey: Creative Lessons from Inside an Icelandic Volcano

Trends and Insight 250 1 Add to collection 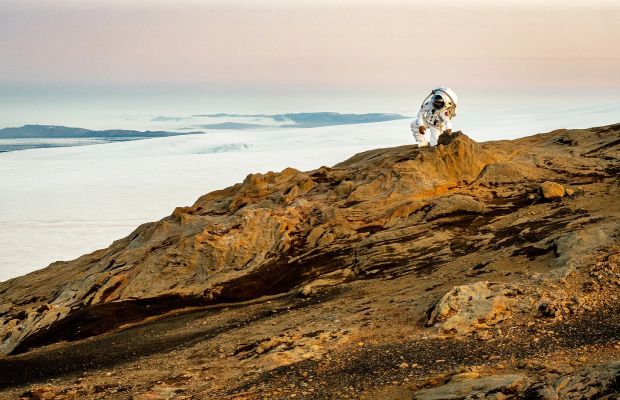 There’s something irresistibly romantic about the image of the explorer – and as the prospect of commercial space travel and extraplanetary settlements shifts from the realm of pulp scifi to possibility, those explorers who head into the uncharted and dangerous corners of earth have never been more important. In order to prepare for futures on Mars or in deep space, explorers, engineers and scientists have been venturing into those parts of our home planet that mimic conditions elsewhere.

This summer The Explorers Club and the recently-formed Iceland Space Agency headed to an Icelandic volcano in order to test the RISD/NASA designed analogue MS1 Mars Suit. It was a historic mission and a successful one.

Dave Hodge, who you likely know in his adland guise as Partner and Creative Director of Finger Music, donned his explorer’s backpack and thermals and headed to the Vatnajokull glacier in Iceland. He’s been involved in the Explorers Club for some time, sitting on the Film Committee and Business Development team. In Iceland, he and the team descended into the crater of the Grímsvötn volcano. He was Executive Producer on the expedition, documenting the journey – and he even got a taste of what it might be like to be an astronaut, trying on the suit. 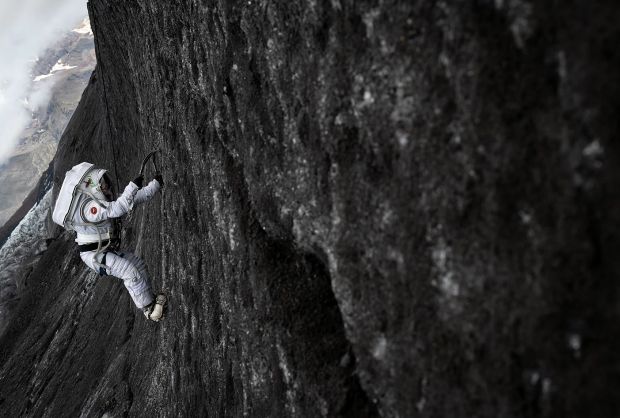 LBB> How did you get involved in the Explorer's Club?

Dave> I had been going to public events there for some time, and it always felt like home…I come from a family of scientists, I’ve always been into epic adventures, and the Explorers Club is made up of people who combine these things. Due to my past experience as well as conservation projects I’ve been involved in, the Club accepted my membership. It is my honour to be in such great company.

LBB> What sort of things have you done with the Explorers Club in the past?

Dave> Well I’ll start by clarifying something. The Club doesn’t really ‘do trips’. A lot of people ask if its a travel club and host expeditions and such. It’s the members that initiate their own expeditions, but there’s a very supportive culture around it: Grants, Flag Expeditions, chapters all over the world who can assist with things, and a vast historical archive where members can research future expeditions.

And back to the initial question. I serve on the film committee, and in business development for the Club. The ISAGEVR1 Mission was my first Flag expedition. You need to apply for the flag, which is approved by the flag and honours committee, and there are certain criteria attached to carrying the flag. This includes a rather detailed report, presentation, and flag return ceremony. 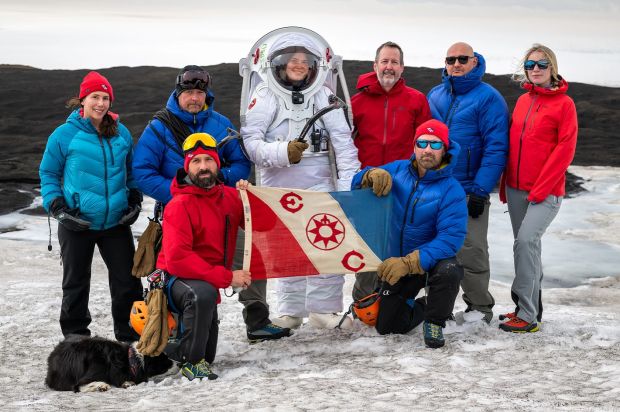 LBB> So tell me about this project with the Iceland Space Agency - what was the goal of it?

Dave> This inaugural mission was to land on one of Iceland’s most remote terrestrial analogues. Terrestrial analogues are areas on Earth that mimic the conditions of other planets and moons. The purpose was to conduct field research in and around the subglacial lake at the Grímsvötn volcano located on top of the Vatnajökull glacier. This specific area is considered an analogue to the polar regions of Mars and may inform how Martian life could still exist on the planet today.

The RISD Mars Suit 1 (MS1) is a Mars exploration suit analogue (simulator). It was designed and constructed by Michael Lye with students, especially Katarzyna Matlak and Erica Kim, at the Rhode Island School of Design (RISD) with funding provided through a grant from the NASA Rhode Island Space Grant consortium. The MS1 suit was developed with input from members of the HI-SEAS IV crew and NASA’s Johnson Space Center Space Suit Engineering team, and incorporates geometry derived from NASA’s Z-2 prototype spacesuit. It features a hard upper torso and soft lower torso design, with rear suit entry. At roughly 50 pounds, the suit is similar to what a planetary exploration suit would weigh in Martian gravity.

LBB> And how was it tested in the volcano – I can’t quite imagine how you got inside a volcano!?

Dave> Yes, it was testing inside the volcano. But. To be clear, this volcano has a 200m ice cap over it (it is in the middle of Vatnajokull glacier), a lake inside the caldera, and beneath the lake is the magma chamber of the Grímsvötn volcano.

So… inside the volcano, we were. There was a lot of geothermal activity, in terms of vents blowing hot steam, but we were with a very experienced guide who kept us all very safe. The suit was tested in a number of ways. There was the mechanics/ physical testing of the suit, as one component. The second component was using actual scientific equipment, like you would use on the Moon or Mars, while wearing the suit. The designer was collecting all of this data, to return with and add to the next generation of the suit. 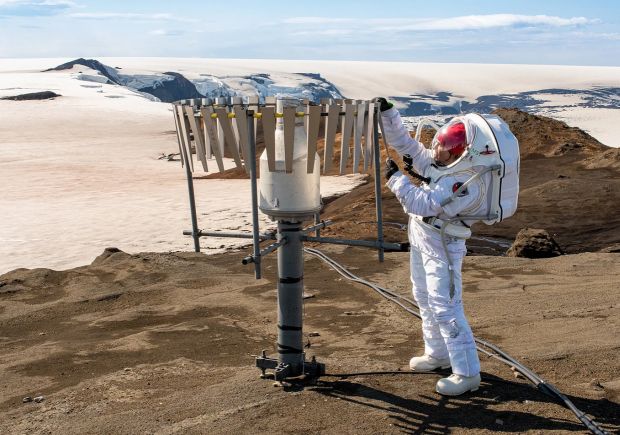 LBB> Did you get to wear the suit and what was that experience like?

Dave> I did. It was surreal. Here we were, in the most remote place in Iceland, in the centre of Europe’s largest ice cap. So to be in a suit like this, and look around you, the experience was truly like you were on another planet. The suit itself was pretty comfortable. Two shoulder straps, like a backpack, joined a waist belt via a metal’ spine. You have control over how much weight is on your hips, and how much is on your shoulders. The vents circulating air was a bit of an unusual feeling, but rather comforting that it was happening!

LBB> Who were the interesting people you got to know during the expedition?

Dave> All of the team members were incredibly interesting, but I’ll give honourable mention to Helga Kristin Torfadottir; an Icelandic Geologist who was in the suit a lot (including climbing up an ice wall in full climbing gear with crampons and ice axes...she’s a badass! We also had an Analog Astronaut and Human Factor expert, who studies humans in Isolated Confined and Extreme (I.C.E) Environments. We were definitely in this type of environment, all living in a single room in a hut inside a volcano together.

LBB> What was your role in the expedition?

Dave> I was an Executive Producer, overseeing sponsorships, including our title sponsor, United Airlines. I was also the lead for the Explorers Club on this expedition, as well as the photographer. I also drove one of the three custom modified glacier trucks. 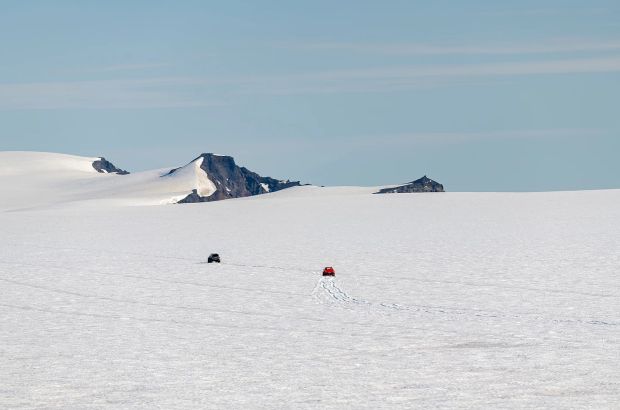 LBB> What were your highlights from the expedition?

Dave> Wearing the suit, for sure! But also, I’d say driving the truck for 10 hours across the glacier to get to the volcano (and back), working with an incredible team, and being in such an incredibly remote and beautiful place.

LBB> How has the project changed your perspective on life on earth?

Dave< The interesting part of testing all this stuff for space, is that it also informs the scientific community on improving things here on Earth. Regarding whether humans will set foot on Mars, my perspective on ‘it’s actually going to happen’ definitely deepened. In the beauty and majesty of the place.

LBB>What can people working in the 'creative' industry learn about creativity from these scientists, designers and explorers?

Dave> Innovation comes from play.  Some of the biggest brands in the world have created and become successful my exploring, and pushing your mind to new and exciting places. And also, don’t get attached to your label. I’m a this, or I’m a that. People who only think of me as a musician are puzzled that I work in sponsorship and business development, and test spacesuits in Iceland. If you get attached to your label, you’re drastically reducing your field of vision.

LBB> How was the experience inspired you subsequently?

LBB> If you were offered the chance to go be a founder member of a Mars colony... would you go? If so why? If not why not?

Dave>  Great question! I need to think about that one. I love this planet and all of the beings on it, so it would be a tricky proposition to leave it all behind…more on that later…!