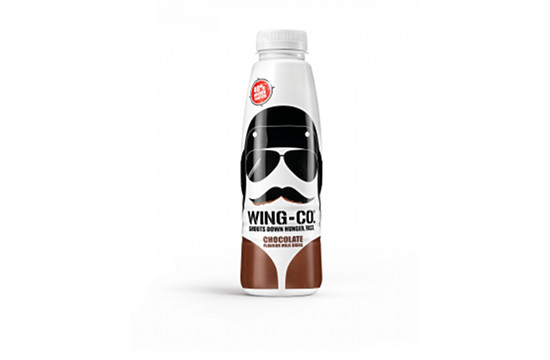 Space has developed a below-the-line push to support the launch of new Arla product, Wing-Co., a chocolate milk drink with added protein aimed at men in their 30s and 40s. It is the agency’s first brief from Arla.

Space takes its lead from the advertising campaign, created using the strapline ‘The manly chocolate milk for men with added man’ and built around rugged poster-boys – with a large helping of irony. The campaign borrows its approach from the overly masculine advertising of ‘Pour Homme’ fragrances, and runs with the headline ‘lait d’homme’.

The drink, which contains 40% more protein than most chocolate milk drinks, comes in a retro-style bottle starring a moustachioed flight commander and carries the strapline ‘shoots down hunger, fast’. Wing-Co. will be marketed as a satisfying alternative to less healthy snacks.

An out-of-store sampling push will run in conjunction with leading retailers Tesco, Morrisons and ASDA, handing out 20,000 samples with coupons across 20 locations. Upon receiving their free sample of Wing-Co. consumers will be invited to achieve an ‘exaggerated feat of manliness’ through a ‘log’ throwing game in a specifically designed area of the store.

In-store activity will roll out across convenience retail and other leading grocers in June and will include sampling and point of sale to drive excitement and awareness.

As part of a partnership with Shortlist magazine, over 60,000 samples of Wing-Co. will be given away on 6th June across 16 locations in central London by Wing-Co. ambassadors together with a copy of Shortlist.

Sean Kelly, group account director, Space, said, “Our brief was to bring Wing-Co.’s proposition to life and to support the spirit of the advertising . The out-of-store activity will tap into a sense of competition amongst men and challenge them to ‘man up’ on their Saturday morning shopping trip, which we hope their partners will appreciate!”

Gareth Turner, Senior Brand Manager - Dairy Drinks at Arla Foods, said, “Wing-Co. is playfully aimed at filling a gap for hungry men as a satisfying alternative to less healthy snacks. Space’s creative approach brings to life the brand’s tone of voice and they have developed an engaging programme to get the product in the hands of our target audience. This is Arla’s first project with Space and they instantly understood our ambition for Wing-Co.”