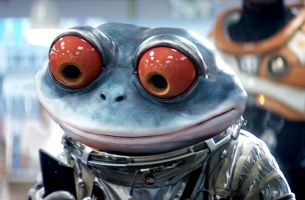 Total is launching its new Space Travellers ad campaign featuring Total's upgraded network of service stations in France and around the world. Created with advertising agency BETC, the quirky campaign will be deployed internationally, in Europe, North Africa, the Middle East and Asia.

The film, created by BETC, depicts a half-human, half-extra-terrestrial crew, whose low-on-fuel spaceship touches down at a Total service station.  Despite being light-years away from Earth, the members of this crew find everything they need and more at the station, from Excellium fuel to the store's wares, a café and free Wi-Fi. They enjoy a pleasant, refreshing break before continuing on their way, newly 'energized'.

As part of its corporate brand positioning 'Committed to Better Energy' launched in 2014, and twenty-five years after introducing the legendary slogan 'You know where to turn', this ad campaign unveils the new tagline of the service station network: 'Energizing Life. Every Day.'

The new tagline is more than catchy words. It's a strong promise to customers that Total stations change with the times and are enjoyable, pleasant places to be.