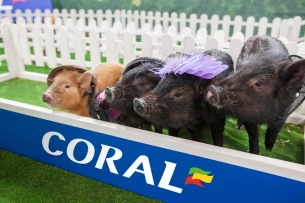 Creative agency Space is putting bookmaker Coral in the winners’ enclosure with an extraordinary festival of micro-pig racing to coincide with the Cheltenham Festival that runs from 10 to 13 March.

Coral’s CheltenHAM Festival will create engaging social content for punters at one of the year’s biggest sporting events, giving Coral increased share of voice during this notoriously competitive period for bookmakers.

The festival of micro-pig jump races devised and shot by Space gives a different twist on the famous race event and provides a fun way for race-goers to predict the winners of each day’s feature race. A series of teasers and clips of the pigs hurtling around a specially designed CheltenHAM course in the silks of each race’s runners will be shown at the start of each day on Coral’s social channels. PV (Pig View, of course!) shots will be provided by a pig mounted ‘Ham Cam’ and expert racing commentary will create more drama. To add further engagement, punters who successfully predict the winners of the piggy races can also win free bets for that day’s races.

The campaign aims to raise awareness of the Coral brand at the four-day festival and will link thematically to Coral’s Cheltenham Heroes campaign which celebrates the more traditional equine racers and their epic feat’s of endurance.

Jason Nicholas, managing partner at Space, said: “Cheltenham is one of the standout events of the racing calendar and it is notoriously tough to get attention amid the clamour of competing voices. The CheltenHAM Festival provides Coral with a unique property and novel content that fits the fun atmosphere of the event. It should really get punters talking.” 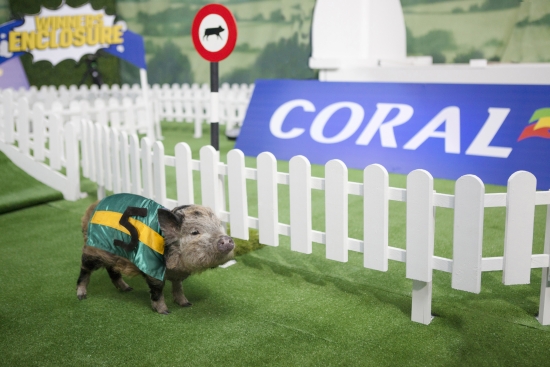 Tania Seif, Head of Social Marketing at Coral, said: “We’re all really excited and have high hopes for a successful CheltenHAM Festival. We felt the idea was a winner from the start and has a great chance of delivering on our key objectives of getting people to share Coral content and cutting through the noise around the busy Cheltenham period.”

Teaser activity will commence on Twitter, Facebook, Instagram and Vine a few days before the festival to get ‘#CheltenHAM’ trending. Space has produced a range of content including Vines, posts and a number of video edits to build excitement ahead of the CheltenHAM races themselves.