soundlounge Compiles its Ones to Watch for 2020

The Influencers 152 1 Add to collection

INFLUENCER: soundlounge's licensing and marketing assistant James Carnell runs downs his ones to watch for the new year 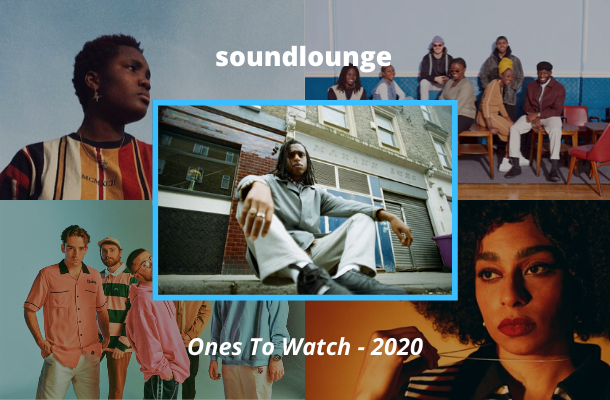 The Christmas Holidays are over and it’s the start of a new year! To get you excited for 2020, soundlounge licensing and marketing assistant, James, has compiled a list of upcoming artists that should be finding their way into your music libraries this year. If these five acts are anything to go by, 2020 should be another groundbreaking and exciting year for music. Happy listening!

Currently leading the resurgent UK Jazz scene from the front, KOKOROKO, which means ‘be strong’ in Urhobo, are a multi-cultural collective of young musicians led by trumpeter Sheila Maurice-Grey brought together by the love of Afrobeat. You might already know their track ‘Abusey Junction’ as it has so far amassed over 35 million views on YouTube and almost 15 million streams on Spotify. Initially released as part of the infamous ‘We Out Here’ compilation in 2018, the track formed part of the group’s eponymous West African-inspired debut EP released on Gilles Peterson’s Brownswood Recordings. There’s more to come from KOKOROKO in what’s set to be an exciting 2020, which includes a gig at the Roundhouse on 28th January.

Brighton-born alternative R&B artist Celeste was named BBC Music Introducing’s Artist of the Year in 2019 and it’s clear to see why. After putting out debut EP ‘The Milk and Honey’ on Lily Allen’s Bank Holiday Records in 2017, she signed to Polydor Records and has released a string of acclaimed singles and EPs since, picking up praise from the likes of Jorja Smith, Sam Fender, and Jools Holland along the way. Celeste toured across Europe with Michael Kiwanuka in 2019, and headlines Shepherd’s Bush Empire in April of this year. ‘Yes! 2020!’ she told the BBC’s Huw Stephens, “I’ve been looking forward to this year for so long.” Celeste will release her debut album this year, so keep your eyes peeled for that.

19-year-old musician and poet Arlo Parks has only just left school but is already turning heads. Inspired by Earl Sweatshirt, Portishead, and King Krule, her ‘confessional and tender’ music draws from indie, soul, bedroom pop, and folk. Signed to Transgressive Records, Parks’ first EP, ‘Super Sad Generation’ (a four-track collection entirely self written between the ages of 16-18) was heavily championed last year by BBC Radio 1, Beats1, Radio X, COLORS, and many more. Parks’ 2019 also featured gigs at The Great Escape, Glastonbury, and Latitude Festivals, and the release of her most recent EP, ‘Sophie’. A special and intriguing artist who will embark on her first ever headline tour this year, Arlo Parks is definitely one to pay close attention to.

Formed in Leicester over a shared love of classic hip-hop, Easy Life have come a long way since their debut single ‘Pockets’ was released in 2017. A self-proclaimed ‘hedonistic vision and form of escapism’, Easy Life are one of the most aesthetically out-there and sonically pleasing bands around at the moment. Fusing smooth hip-hop swings, jazz melodies, and downbeat vocals, the five-piece have already signed to Island Records, had a song placed in FIFA 19, and headlined the Glastonbury 2019 BBC Introducing Stage. Easy Life’s new mixtape, ‘Junk Food’, drops on January 10th and the group have already sold out Camden’s Roundhouse for their March gig…impressive!

If you haven’t heard of Bakar, then you’ve been doing something wrong. With debut album ‘Badkid’ (*bash records) already under his belt, 2019 saw the Camden-born singer-songwriter really come into his own. Bakar signed with Black Butter/Sony Music, released EPs ‘Chill’ and ‘Will You Be My Yellow?’ (in my opinion one of the best releases of the year), and sold out Electric Brixton in December. And to add to that he collaborated with Arsenal Football Club for the re-release of their infamous ‘Bruised Banana’ away kit…not a bad year. Bakar is adept at creating genre-spanning music, drawing on indie, punk, ska, and grime, and has attracted admirers such as Elton John and Skepta. 2020 is set to be a big year for one of the UK’s most exciting artists at the moment, and I can’t wait to hear what he has in store.