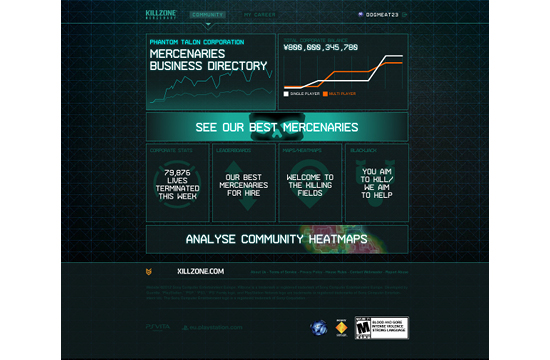 To coincide with the launch of PlayStation Vita’s Killzone: Mercenary, Sony Computer Entertainment and Guerrilla Games has reenlisted Nomads to help extend the gaming experience beyond the console and boost player engagement through an immersive online campaign.

The new Killzone: Mercenary website will use code devised by Nomads to boost player engagement off-console through the killzone.com website. Players will be able to track and analyse their in-game movements online via their mobile, PC or tablet, giving gamers the option to access in-depth statistics of the game when away from their PSVita.

Nomads has adapted the site to work seamlessly across all internet platforms taking advantage of the increase in gamers’ use of second screens. The service is also optimised for the PSVita and means players can switch to killzone.com after each game and almost immediately analyse stats and replay the game on site.

Nomads previously worked on the online campaigns for the past three Killzone games, installing the killzone.com website with player engagement features such as access to up-to-date progress and stats as well as participation in a personalised and integrated player forum. This not only helped to boost communication between Guerrilla Games and Killzone players, but it also resulted in a huge spike of 331,198 unique visitors to killzone.com during the launch week of Killzone 3.

Hermen Hulst, managing director at Guerrilla Games said: “Killzone is one of the most successful gaming franchises for PlayStation, pulling in a loyal base of gamers for each title that gets released. This year, Nomads has taken player engagement to a whole new level, creating the opportunity for our gamers to immerse themselves in Killzone whether they have the console in their hands or are accessing the site via their mobile, PC or tablet device.”

“Having a web presence separate to the game also means that we can advertise and engage with these players who are off-console, extending Killzone’s reach and shelf life.”
Craig Stuart, creative director at Nomads added: “We’re delighted to have worked with Guerrilla Games and Sony once again on the Killzone franchise. The future of gaming on next-generation consoles is greatly enhanced by a shared connected experience with a passionate community. In close collaboration with Guerrilla, we’ve developed tools to provide gamers further insight into their gameplay.”

“Gamers can analyse last night’s game away from the console on the train to or from work, or alongside the console as a second screen to keep track of their friends’ activity using near-live in-game data, increasing engagement and driving interest in the game.”