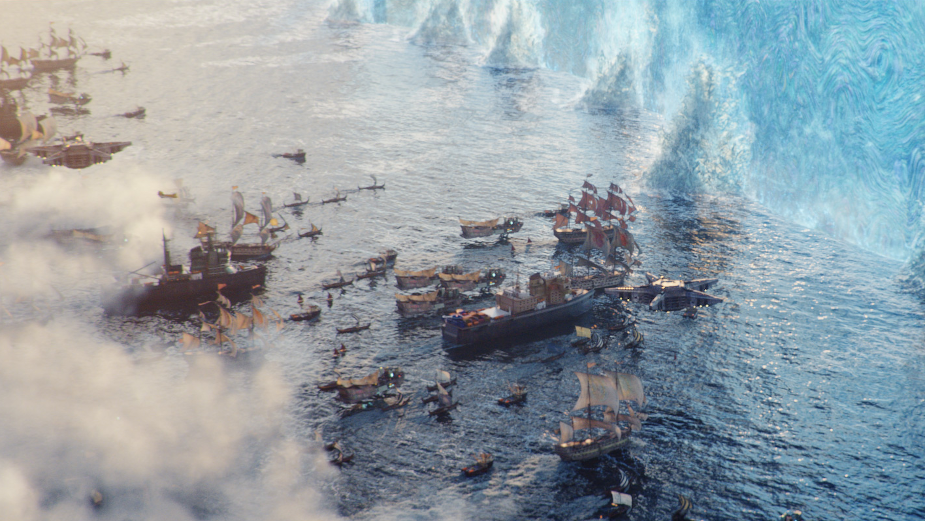 Sony Interactive Entertainment has debuted its latest spot devoted to the PlayStation brand. Sony are entering a new exciting time for PlayStation and its raising the bar for its fans. This new spot is a metaphor for the journey that it will embark upon to a new era in entertainment.

The film opens on a small boat on the open sea. We see our gamer spot a mysterious magical light in the clouds on the horizon. He sets off in pursuit of the mesmerising light.

As he ventures further into the cloud, day turns to night and his boat is hit by an unexpected pulse of blue energy, causing the mast to inexplicably sprout leaves. Our gamer stares up in amazement.

The boat emerges from the cloud. As our gamer surveys his surroundings, he realises he is not the only one who has been called here as an armada of pirate galleons, Viking longboats, spaceships, and steampunk airships arrive at this unknown destination. An explorer plane arcs across the sky, and we see that rather than the open ocean ahead of them, they are faced with a magical blue, gravity-defying membrane - the edge of the world.

Another pulse of energy is released from the membrane, as our gamer approaches the edge. He pauses in trepidation as the community of travellers look to him for a signal of what’s to come next. They look on in anticipation, and charge bravely together into the unknown with full force and excitement. His boat races towards the edge with the other vessels in close convoy. However, rather than going over the edge, the community of travellers pass through the membrane, transported into a new world beyond.

PlayStation launched the latest spot with its creative agency, adam&eveDDB.

“With our new brand spot, we highlight what the PlayStation brand means to us and to our fans,” says Mary Yee, VP of global marketing. “We take the viewer on a journey of the solitary player as he is joined by other gamers within his community as they reach the edge of the known world and then charge bravely together into the unknown. ‘The Edge’ speaks to the rally cry for PlayStation.  It embodies who we are and what we stand for.  We excite and thrill our fans.   We will take our fans on this next voyage, past the edge of what they thought gaming was capable of.  And we will continue to push the boundaries of play this next generation and beyond.”

Baba O'Riley by The Who